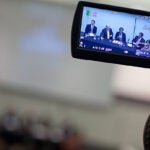 Samuel Phillips Huntington died nearly two years ago. Before that, he had taught political science at Harvard almost continuously since 1950.

But these facts don’t make Huntington a footnote in American history. His legacy of original insights — and challenges to political orthodoxy — is alive today: in his 17 books, hundreds of articles, decades of teaching, and most of all in the scholars and editors he mentored along the way.

“Sam’s legacy is … vibrant in the current thinking of his students,” said Graham Allison, who moderated a panel on Huntington this week (Nov. 30) at the John F. Kennedy Jr. Forum, where extra seating was set up to accommodate the crush of listeners. (Allison, at Harvard nearly every year since entering the College as a freshman in 1958, is director of the Belfer Center for Science and International Affairs, an arm of the Harvard Kennedy School.)

He also acknowledged the pain and irony of the death of Huntington — a man who is no longer with us, but whose ideas are. Allison paraphrased poet Archibald MacLeish: “When one thinks of the greatness of Harvard, one thinks first of the dead.”

The panelists — all Harvard Ph.Ds who were either Huntington’s students or influenced by him — acknowledged his qualities as a teacher, debater, and scholar. But they also answered the question hanging over the whole event: Why care — today, now?

In fact, said Rose, “you probably can’t understand certain kinds of subject matters unless you grapple with Sam Huntington’s work — whether you agree or disagree.”

And agreeing with Huntington wasn’t always easy. He had a genius for grand, unifying ideas that often challenged conventional thinking and infuriated critics. “He never shied away from taking … things on,” said journalist Fareed Zakaria, editor at large at Time magazine, host of CNN’s “Fareed Zakaria GPS,” and the onetime managing editor of Foreign Affairs. In academics, he said, “the instinct is for the capillary, not the jugular. Sam always went for the jugular.”

In the face of controversy, Huntington had a ready answer, said Zakaria: Write another book that will make waves.

And the waves keep crashing in. By the end of his life, Huntington was probably best known as the author of “The Clash of Civilizations” (1996). He argued that in a post-Cold War world “cultural identities, antagonisms and affiliations” would play the biggest role in relations among states. Critics called his thesis simplistic, arbitrary, and dangerous — a legitimization of Western aggression against other cultures. But in the aftermath of the Sept. 11 attacks, Huntington’s controversial idea gained a wider audience.

His last book, “Who Are We? The Challenges to America’s National Identity” (2004), argued, in part, that Anglo-Protestant culture made it possible for American values — hard work, delayed gratification, and personal responsibility — to arise.

“This is one of the biggest challenges — gauntlets — thrown out there,” said panelist Francis Fukuyama, a Stanford University political philosopher whose 1992 book “The End of History and the Last Man” argued that after the Cold War liberal democracy would triumph globally. It’s an optimistic idea that counters Huntington’s darker “clash of civilizations” vision.

“Who Are We?” is all the more a challenge, the panelists said, because it warns that large-scale Latino immigration could topple American culture, turning the United States into a nation divided by language and values.

There is room to disagree with that, said Rose. But in his mentor’s defense, he added, “Sam Huntington didn’t have a bigoted bone in his body.”

There is also room to agree with “Who Are We?” said the panelists, who themselves were a multicultural gathering: two are Jews, one was born in India, and the fourth is Japanese-American.

“Would I have phrased it the way he did? Absolutely not,” said Eliot Cohen ’77, a defense and strategic studies expert at Johns Hopkins University, who took his political science Ph.D. at Harvard in 1982. “But I agree with Sam that there is something distinctive about the United States, and there’s a kind of distinctive freedom. Where it comes from is complicated.”

Cohen remarked on the universal appeal of American sentiments, even among citizens or immigrants at a far remove from Anglo-Protestant upbringings. “This belongs to me,” he said, “even though at the time that the Gettysburg Address was delivered, my great-great-grandparents were dodging Cossacks.”

Rose agreed. “I believe in the dominance of the culture that he was talking about,” he said of Huntington. “The whole genius of the United States, precisely, is that it universalized a set of traditions and a set of patterns that everybody else could come into.”

Is that set of traditions perfect? No, said Rose, who paraphrased the closing lines of Huntington’s 1981 book, “American Politics: The Promise of Disharmony,” on the frequent gap between American ideals and American actions and institutions: “America is always a disappointment, but it is only a disappointment because it is always a hope.”