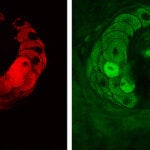 A team of researchers from Harvard Medical School, Brigham and Women’s Hospital, Massachusetts General Hospital, and the biotechnology company Pacific Biosciences, with colleagues from Haiti, has determined that the strain of cholera erupting in Haiti matches bacterial samples from South Asia and not those from Latin America.

The scientists say that the cholera bacterial strain introduced into Haiti probably came from an infected human or contaminated food or other item from outside of Latin America. It is highly unlikely, they say, that the outbreak was triggered by ocean currents or other climate-related events.

This apparent human origin offers some good news: Control measures such as rapid screening for cholera infection and vaccination might limit the risk of cholera epidemics in the future if coordinated on a global level.

The findings, which appeared online Dec. 9 in the New England Journal of Medicine, were reported by Matthew Waldor, a Howard Hughes investigator and the Edward H. Kass Professor of Medicine at Harvard Medical School (HMS) and Brigham and Women’s; John Mekalanos, chair of the Department of Microbiology and Molecular Genetics at HMS; Stephen Calderwood, the Morton N. Swartz, M.D. Academy Professor of Medicine (Microbiology and Molecular Genetics) at HMS and Mass General; Eric Schadt, chief scientific officer of Pacific Biosciences in Menlo Park, Calif.; and colleagues including those at the Fondation pour le Développement des Universités et de la Recherche en Haiti in Port-au-Prince.

“Our data strongly suggest that the Haitian epidemic began with the introduction into Haiti of a cholera strain from a distant geographic source by human activity,” Waldor says. “Some scientists believe that the strain arose from the local aquatic environment, but this hypothesis is not supported by our analysis, which clearly distinguishes the Haitian strains from those circulating in Latin America and the U.S. Gulf Coast.”

The results align with an earlier report from the U.S. Centers for Disease Control and Prevention (CDC), which was based on a relatively limited molecular fingerprinting technology. Waldor and colleagues also published a perspective online Nov. 24 in the New England Journal of Medicine, advocating the establishment of a cholera vaccine stockpile in the United States to be used to quell outbreaks like the one in Haiti.

Cholera is an ancient disease that has been tracked in a series of pandemics since the early 19th century. It typically has arisen in South Asia, around the Ganges Delta of India and Bangladesh. Caused by consumption of food or water that carries the Vibrio cholerae bacterium — usually through fecal contamination — the disease entails a potent intestinal infection that results in severe diarrhea and dehydration. An estimated 3 million to 5 million cases occur each year, resulting in 100,000 to 120,000 deaths. The most recent large-scale eruption, the seventh pandemic, originated in Indonesia in 1961 and spread to India, Bangladesh, and other areas of the world. The pandemic exploded in Peru in 1991 and since then has become established in much of Latin America. The United States has been touched primarily by a different strain of cholera, with sporadic cases occurring along the Gulf Coast of Texas and Louisiana.

Remarkably, the seventh pandemic strain did not take root in Haiti. This reprieve may be explained by the country’s geographic isolation on the island of Hispaniola, which it shares with the Dominican Republic. Until the recent outbreak, the island had been cholera-free for about a century despite climatic risk factors such as El Niño and La Niña. Hispaniola’s charmed status apparently has changed with the recent epidemic, which emerged in Haiti nine months after the country’s potable water infrastructure was destroyed in the Jan. 12 earthquake.

In the weeks since cases were first confirmed in the Artibonite province of Haiti on Oct. 19, the disease has reached all 10 of Haiti’s provinces and has spread to the Dominican Republic. More than 1,800 people have died from the outbreak, and more than 80,000 have fallen ill.  The consensus among public health leaders is that the epidemic has not yet peaked.

Because the disease broke out in Haiti very close in time and place to the arrival of U.N. peacekeeping forces from South Asia, speculation surged that it may have been introduced by these troops. This possibility has spawned deadly riots in Haiti against the U.N. peacekeepers. But the researchers caution that determining the actual source of the Haitian cholera strain will require further epidemiological investigation.

The recent study involved a group of HMS investigators from Mass General including co-authors Calderwood, who is chief of the Division of Infectious Disease at the hospital; Jason Harris, assistant professor of pediatrics; and Richelle Charles, instructor in medicine. Harris and Charles also went to Haiti to help with patient care. Calderwood and Edward Ryan, associate professor of medicine at Mass General, are principal investigators of a program funded by the National Institutes of Health, International Collaborations in Infectious Disease Research, which focuses on cholera in collaboration with the International Centre for Diarrhoeal Disease Research in Bangladesh. Harris and Charles are co-investigators of this program.

To identify the probable origin of the cholera strain in Haiti, the scientists used a third-generation, single-molecule DNA sequencing method developed by Pacific Biosciences. Thanks to a crash effort at the company, the team determined the genome sequences of two Haitian cholera samples and three cholera samples from elsewhere around the world. Based on advanced imaging technology, the method enables researchers to observe a natural enzyme synthesizing a strand of DNA in real time. As such, the technology actually tracks and documents nature at work, a rapid approach compared with other sequencing technologies. The method allowed a comprehensive analysis and comparison of critical DNA features among the various cholera samples, which included single nucleotide variations, insertions and deletions of particular portions of the genome, and structural variations. The analysis showed a close relationship between the Haitian samples and the seventh pandemic variant strains isolated in Bangladesh in 2002 and 2008.

Genetic changes occur quickly — within hours in the lab and probably weeks within the environment — through natural modes of DNA swapping and mutation among bacteria. Their evolution is based, in part, on the acquisition, loss, and alteration of mobile genetic elements, including DNA from the CTX bacterial virus, which bears the genes encoding the cholera toxin, and other genetic sequences that may make a particular strain more adapted to a given ecosystem. The resulting heterogeneity has been used to categorize strains of the seventh pandemic and to understand their transmission around the globe.

The researchers call for global health officials to consider mass vaccination not only to control the spread of cholera among the Haitian people but also to reduce the chance that the mingling of different cholera strains in the Caribbean region could produce a more virulent strain that could cause much greater harm. Their study also points to the benefit of immunizing individuals who travel from areas where cholera is present to regions where it is absent but that may be at risk for an epidemic.

“Given that the existence of new South Asian strains hadn’t been documented in Caribbean nations or elsewhere in Latin America,” Mekalanos says, “our investigation suggests that further expansion of this epidemic into this region may occur with replacement of the currently endemic strains with much more threatening variants. That would be a deeply troubling outcome.”

“A cholera vaccination campaign might not only control the disease but also minimize the dissemination beyond the shores of Hispaniola of the new South Asian strain and the virulence genes that it carries.”

The research was funded by the National Institute of Allergy and Infectious Diseases.