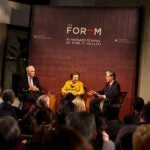 While in Houghton Library, sorting through stacks of old manuscripts and letters from the great naturalist Charles Darwin, history of science graduate student Myrna Perez and lecturer Alistair Sponsel stumbled across something extraordinary: a previously unknown letter from Darwin to his colleague and later nemesis, zoologist Richard Owen.

“We initially went [to Houghton] to confirm that a few letters we thought were here at Harvard were actually here,” said Sponsel, who, like Perez, is an affiliate of the Darwin Correspondence Project, whose American editorial office is at Harvard.

“We were not really looking for a new letter,” Perez said. “One of the editors … noticed there were some discrepancies between the letters that the project believed to be at Harvard, and what she could tell from the Harvard catalogs themselves.”

After cross-checking the British lists and the Harvard catalog, Perez came across a letter that couldn’t be found on any of the lists.

“I was a little excited, but a bit skeptical that it would actually be new,” she said. “And then when I got it, I spent a long time looking through our project databases, had Alistair check what I did, and we finally concluded that it was a letter unknown to the project.”

According to Sponsel, Darwin wrote the undated letter in April 1848, long before his landmark book “On the Origin of Species” was published. Darwin would have been 39 years old, but he was already famous as a voyager and author. Owen had previously contributed to Darwin’s book “The Zoology of the Voyage of the HMS Beagle.”

“We can tell with fairly good confidence which Sunday in 1848 he wrote this,” Sponsel said. “The two [Owen and Darwin] were working on a publication for the British Navy, a handbook for people on voyages to teach them how to make scientific observations.”

Perez added, “The letter, and the entire exchange, gives a perspective on the collaborative process of their work and the kind of instructions that Darwin felt were appropriate for new naturalists on naval expeditions. He makes some interesting comments in the letter, saying that he would have loved to have had this kind of manual on his own Beagle voyage.”

“Unknown letters don’t come up very often, maybe about 10 a year,” said Darwin scholar Janet Browne, Aramont Professor of the History of Science and Harvard College Professor. “This letter is unusual in that it is a letter from early in Darwin’s life, before ‘On the Origin of Species’ was written, and with a particular individual with whom he became almost sworn enemies.”

It was “On the Origin of Species” that changed Darwin and Owen’s relationship. After its publication, Owen wrote a cruel review of the book, and the relationship disintegrated.

The discovery comes as part of Perez and Sponsel’s work for the Darwin Correspondence Project, an endeavor begun in the mid-1970s by American scholar Frederick Burkhardt and now based at the University of Cambridge.  Participants there and at Harvard are dedicated to cataloging, editing, and publishing Darwin’s correspondence from throughout his life. To date, Browne said, the project has cataloged about 15,000 letters from “unexpected people in all sorts of categories, including women scientists and African colonial administrators.”

“Historians have found principally through this large publishing project that correspondence is a significant element of what scientists used to do,” Browne said. “It turns out that someone like Darwin was writing letters as a way of collecting information. It was part of his scientific method.”