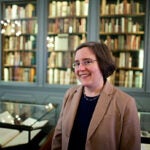 Between the American novels “Miss Ravenel’s Conversion from Secession to Loyalty” and “The Red Badge of Courage” lies … not much.

To Amanda Claybaugh, that’s a mystery that needs unraveling. After all, it means that the literary heart is missing from one of the nation’s most wrenching times, the bitter Reconstruction years when the United States mourned its Civil War dead, tallied its losses, and painfully re-incorporated the South into the Union.

Authorities on 19th century literature routinely divide the century into the time before and after the Civil War, but Claybaugh said the period between the war’s conclusion and the end of the Reconstruction, roughly from 1865 to 1880, is something of a literary desert.

Claybaugh, who was named a professor of English and American literature and language in July, wants to know not only what was written during that period, but also what that can tell us about society at the time.

Claybaugh is at work on “The Literary History of Reconstruction,” which examines lost writings of the time, including accounts of Freedmen’s Bureau agents who assisted one-time slaves in the postwar years, the writings of Northern volunteers who went south to help rebuild, as well as fiction by Southern authors and turn-of-the-century writings by African-American authors, who were educated and influenced during Reconstruction.

Those writings, she said, illustrate a nation in transition, one whose citizens are grappling with the very concept of nationhood. Before the war, Claybaugh said, people thought of themselves as citizens of a particular state. Afterward, with the federal government having emphatically claimed superiority over the states, they were citizens of a single country.

This is not Claybaugh’s first foray into using literature as a mirror reflecting the society in which it was written. Her doctoral dissertation led to her first book, “The Novel of Purpose: Literature and Social Reform in the Anglo-American World,” which examined British and American 18th century literature by novelists who were social reformers and looked at how their writings and literary techniques influenced even major writers uninterested in reform, such as Henry James and Mark Twain.

Claybaugh conducts her research through exhaustive examination not just of the literary works of a period, but also of popular works such as magazines and newspapers. The popular works, she said, give her a sense of the broader societal themes of the times. She credits exhaustive digital databases that allow her to conduct much of her research from her computer, rather than having to peruse the documents through archives.

English Professor Elisa New said Claybaugh’s late 19th century expertise fills a gap in the department during a key period in American literature. In addition, she said, Claybaugh’s work has been groundbreaking, because literary scholars have overwhelmingly tended to look at literature within national boundaries, not from a trans-Atlantic or international point of view, such as Claybaugh did with “The Novel of Purpose.”

“Some of it is just breathtakingly new,” New said. “She’s a splendid researcher and a legendary teacher of those late 19th century writings.”

Claybaugh, who grew up in Maryland, became interested in literature as an undergraduate at Yale University. She entered Yale interested in politics, but a freshman literature course captured her imagination. She was intrigued by the interplay between the words themselves and other elements that sometimes indicated meanings beyond or contrary to a specific passage.

“I liked the complexity of literary analysis,” Claybaugh said.

Claybaugh graduated from Yale in 1993 and came to Harvard, where she earned her doctorate in English and American literature and language in 2001. She left Harvard for Columbia University, serving as an assistant and associate professor there. She returned to Harvard during the 2007-08 academic year as a visiting associate professor. She was appointed professor of English in July.

Along the way, Claybaugh has received several awards for her teaching, receiving the Derek Bok Award for Excellence in Teaching as a graduate instructor at Harvard and Columbia’s Presidential Teaching Prize in 2004, awarded each year to five members of the faculty.

Claybaugh teaches lecture courses on the American novel, foundations of American literature, and the 19th century British novel, as well as several undergraduate and graduate seminars on specific authors and literary themes. She said she enjoys the point in class when students stop merely taking in information and begin to disagree with her.

“Then I know they don’t need the class anymore,” Claybaugh said. “For me, it’s very important that I give my students the tools they need to challenge me.”