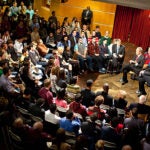 The danger of us against them

As a management consultant at Ernst and Young in the ’90s, Marc Melitz took a mathematical view of how companies were functioning, looking at logistics and distribution problems to help clients perform better.

But the more time he spent visiting manufacturing facilities and gathering numbers on the shop floors, the more he became interested in the bigger picture, the economics that drove productivity, and the broader impact of individual company performance.

Today, Melitz is known for bringing to economics a new understanding of how international trade affects individual companies and vice versa.

Melitz made his splash in the field in 2003, when an article in the journal Econometrica outlined his theories, now called the “Melitz model.” The model has been widely adapted by economists, and in 2008 the Economist magazine named him among the best of a new generation of economists.

“Marc Melitz has done the most influential work in international trade in a generation,” said Elhanan Helpman, the Galen L. Stone Professor of International Trade. “This work provides deep insights into the causes of foreign trade and foreign direct investment, and it has opened up an entirely new line of research that has occupied many scholars in the last decade. Moreover, he is one of the most influential young economists irrespective of field and a great addition to our department.”

Before Melitz’s work, most models looked at international trade from the standpoint of countries and industries. International businesses were treated broadly, only in terms of the industrial sector to which they belonged, such as mining, automobiles, or textiles.

Benefiting from the digital age’s explosion of accessible data at the level of individual producers, Melitz began to examine how individual firms responded in very different ways to international forces.

Melitz’s theory holds that only the largest and strongest companies in an industry engage in international trade because it takes significant resources to conduct business overseas, to break into new markets, to reach a whole new consumer base, and to compete successfully with local companies creating similar products.

In subsequent work, Melitz examined how firms adapt to international forces by organizing their international businesses in different ways, such as establishing affiliate production abroad, adopting new technologies, or tailoring the range of products they export.

This process has a reciprocal effect on the business sector. Driving the least-efficient firms out of business and increasing the market share of the largest, best-run firms increases the productivity of the whole industry.

Melitz came to Harvard last year from Princeton, where he was professor of economics and international affairs. This is a return engagement, since he was at Harvard from 2000 to 2006, serving as assistant professor, associate professor, and the John and Ruth Hazel Associate Professor of the Social Sciences.

Though born in the United States, Melitz was raised in France, where his father worked at the Ministry of Finance. Melitz excelled at math and science in high school and returned to the United States to study at Haverford College, from which he received a bachelor’s degree in mathematics in 1989. He attended the University of Maryland School of Business and received a master’s of science in business administration in 1992.

After Maryland, Melitz went into private industry at Ernst and Young, specializing in a quantitative approach to analyzing business performance. It was in doing this work that he became more broadly interested in economics, a subject he didn’t study at Haverford. He eventually returned to graduate school at the University of Michigan, receiving his doctorate in economics in 2000.

Melitz continues to work on international trade, examining how firms are responding to globalization. He is currently examining French firms and the products they export across different destinations.