The rights of women 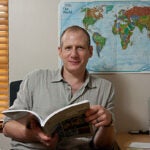 The question put to Irina Bokova caught the director-general of the United Nations Educational, Scientific and Cultural Organization (UNESCO) off guard, not because the question was difficult but because it was breathtakingly simple and direct.

Bokova, a former minister in Bulgaria who last year was elected UNESCO’s first female director-general, had just outlined at the Harvard Kennedy School (HKS), in measured if sweeping terms, her vision for the world organization.

In a talk on Wednesday (Nov. 3) sponsored by the Kokkalis Program on Southeastern and East-Central Europe, Bokova had discussed the need to improve education and end extreme poverty, noting that “our byword should be respect for diversity.” She had talked about UNESCO’s “groundbreaking” agreement with the Smithsonian Institution to promote aspects of “intangible” culture. She emphasized that the designation of a location as a World Heritage Site was not only a source of cultural pride for a country but built wealth and employment as well. Culture “is the ultimate renewable energy … but it needs support,” she said.

Bokova praised the U.N.’s eight Millennium Development Goals for 2015, approved by more than 190 countries, that target poverty, child mortality rates, and health issues. Only five years away from the deadline, “progress has been made, but we’re not there yet,” she said. Gender equality is needed throughout the world, she told the audience, citing disparities in regions like sub-Saharan Africa, where as many as 12 million girls may never attend school.

“It is a common wisdom that women’s rights are human rights … but we believe that empowering girls and women is almost the most powerful way to reach the Millennium Development Goals,” she said.

But during the question-and-answer period, Maria Ivanova, assistant professor of global governance at University of Massachusetts, Boston, and a fellow Bulgarian, asked Bokova: “Given this ambitious vision that you set out for what a new world should look like … how do you characterize the obstacles that prevent us from reaching that vision? … How can we help you in overcoming those obstacles?”

“A very difficult question,” Bokova said after a slight pause. “That’s my job,” Ivanova replied. “I am happy I am not one of your students,” Bokova said as Ivanova smiled.

Bokova, who attended the Government Executive Program in Leadership and Economic  Development at HKS in 1999, struggled to find the right words. The question is difficult, in part because the world is rapidly transforming, she explained.

“Whenever you look at the economy, the environment, you take any area, everything is being transformed — it is in a state of dynamics,” she said. “How [do] we channel this dynamism and energy to work for the public good?”

Perhaps the world is not more dangerous today, but 20 years ago “it was clearer. There were political divisions, East, West, nuclear warheads. Things seemed to be kind of simpler in terms of who was doing what.”

People have become fearful because they no longer feel protected by boundaries; consider the rise of xenophobia in Europe, she said. “People fear change, the other.”

Diversity is an important goal, but it is difficult because many of us have multiple identities, she said, a theme that struck a chord with her audience, a largely international crowd.

“We shouldn’t put people in front of impossible choices — to choose between this or this identity. And to tell them, no, no, no, you’re not an Arab, you’re French. And you’re not a Turk, you’re a German. The biggest challenge is how to manage this diversity and how to make it work for the benefit of all.”

The audience burst into applause.

Can Soylu ’14 pressed Bokova on how to improve education for girls in areas with cultural attitudes and religious beliefs that frown on sending girls to school.

This might include raising the legal age for marriage, since girls who marry usually drop out of school, she said.

Bokova acknowledged that UNESCO has had its difficulties, particularly when it was “torn by ideological debate.” But her goal is to “bring back moral and intellectual leadership in a different age.”