The danger of us against them 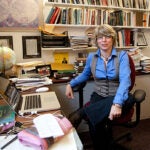 To the heart of a movement

On the eve of the midterm elections, the mayor of New York City and the host of a popular cable TV news show said that partisan rancor in Washington does nothing to solve the country’s woes and, furthermore, doesn’t reflect the more conciliatory attitude of the American public.

Mayor Michael Bloomberg, a Republican turned independent, and Joe Scarborough, the host of MSNBC’s “Morning Joe,” both slammed the two-party system, which, Scarborough said, demands complete loyalty at the expense of effective governance.

“It’s like a Mob family; you don’t get credit for being loyal to the family 95 percent of the time,” said Scarborough, a former congressman, during a discussion at the John F. Kennedy Jr. Forum at the Harvard Kennedy School on Monday (Nov. 1). “You’re not allowed to go across to the other side. If you do, you pay a real price.”

In an event billed “The Midterms & Beyond: A New Way Forward,” Bloomberg, the billionaire founder of a financial media company, said politicians are not being honest with voters.

“Every government that comes in promises a chicken in every pot and nobody has the courage to say you’re really going to have make some sacrifices,” said Bloomberg, a Boston native who received his M.B.A. from Harvard Business School. “Everyone promises to cut the budget without thinking of what that [entails]. Republicans, as a matter of fact, are running without any plan whatsoever.”

“What are you going to do: Close down highways and air traffic control and the FBI and education? Can’t do that,” Bloomberg said. “So all these promises are total pandering and the press plays along. And the most annoying thing is nobody holds anyone accountable afterwards for what they promised.”

The country needs a “restart” of its economy, Scarborough said. “But the politicians on the national stage don’t seem to realize that.” Many supporters of the stimulus bill believe in a kind of “Keynesian reductionism” that every dollar spent stimulates the economy, while others believe that if you cut taxes you “create jobs, improve your back swing, reverse male pattern baldness, and save America!”

Jon Meacham, a Pulitzer Prize-winning historian who moderated the discussion, pressed both men on what they would do to improve the situation.

“We desperately need President Obama to succeed for the next two years,” said Bloomberg, who criticized what he called “the sickness of saying, ‘I hope Obama fails.’”

“You can run against him, you can want a change; that is what democracy is all about,” he said. “But once someone is picked, we have to pull together. ”

Scarborough, a self-described small-government conservative who served as a Republican member of Congress in Florida from 1994 to 2001, said he agreed on little but educational issues with Obama, yet “I want him to succeed.”

“When someone tells you to cheer against the president because he’s not a member of your party, this person is doing something inherently destructive,” Scarborough said. “This all started in earnest in 1992. The day Bill Clinton was elected, Republicans immediately started to try to de-legitimize him.” The same thing happened when George W. Bush was elected, he said.

If Republican make gains in Congress, Bloomberg said, they would be due largely to voter frustration with the current administration rather than a vote of confidence in Republican policies. Even if people from the political fringe are elected, the legislative system is built on seniority and thus “they don’t have any power.”

Moreover, Scarborough said, despite the heated chatter on television and in blogs, “I think for the first time in 20 years, there is a set of big ideas that most Americans agree with,” including balancing the budget, reforming the entitlements, and improving infrastructure. And yet “there’s actually an economic incentive in certain parts of the media to exaggerate issues, to exaggerate differences.”

Bloomberg, who said he was not running for president in response to a direct question by Meacham, said Obama should continue to seek bipartisan support for legislation. Scarborough lamented Obama’s transition from a candidate who excited Republicans in Iowa with his pledges to bring people together to a president who now calls Republicans his ‘’enemies.”

Scarborough said a Republican Congress and Democratic president may actually move the country forward, pointing to his experience in a Republican-controlled Congress under President Clinton, when the federal budget was balanced, welfare reformed, and Medicare preserved.

“Only the good ideas got funded,” he said. “A divided government certainly worked for Bill Clinton and I’m hopeful it could work for Obama as well.”

Rebecca Ross ’11, a history and literature major, asked the panelists how to bring about the changes they were calling for.

“We don’t do anything in a revolutionary way — it’s an evolutionary way,” Bloomberg said. “I think the president has to start being a cheerleader for American industry and explain to people what’s right about this country. Unless people have confidence, they are not going to be willing to make any changes.”