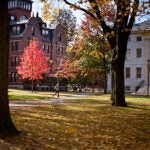 Co-authors chronicle conflicts leading up to landmark decision on abortion

Contrary to popular perception, Roe v. Wade, the U.S. Supreme Court’s 1973 landmark decision on abortion, was not the spark that set off a firestorm of debate on the issue.

Rather, say the authors of a new book on the circumstances that led to Roe v. Wade, the country was already polarized over abortion, even if the debate was being framed in a very different way from today.

Linda Greenhouse, a former New York Times reporter and now the Joseph Goldstein Lecturer in Law at Yale University, and Reva Siegel, the Nicholas deB. Katzenbach Professor of Law at Yale, provided new perspectives on interpreting Roe v. Wade on Thursday (Nov. 4) during the 2010-11 Maurine and Robert Rothschild Lecture at the Radcliffe Institute for Advanced Study at Harvard University.

The pair’s new book, “Before Roe v. Wade: Voices that Shaped the Abortion Debate Before the Supreme Court’s Ruling,” draws on articles, pamphlets, letters, and other archival sources, much of which is housed in the Schlesinger Library at Radcliffe, to recreate the political landscape of the country in the early 1970s.

The results are “fascinating and disturbing,” as Nancy F. Cott, director of the Arthur and Elizabeth Schlesinger Library on the History of Women in America, said in her introduction of the speakers.

The authors set out to explore “How did abortion come to be a matter of constitutional concern?” Greenhouse told the Radcliffe audience. “It seems obvious to us now but it wasn’t so obvious then.”

“More than we expected, we found ourselves documenting political conflict which emerged … before the Supreme Court said a word,” she said.

Various institutional motivations for change (or no change) on abortion policies emerged in the 1960s, Greenhouse said. There were physician groups concerned about the health impact of illegal abortions, environmentalists seeking to ease population growth, the women’s movement, the Catholic Church, and the Republican Party.

Abortion had been criminalized state by state during the 19th century; “it’s not the case that the Founding Fathers lived in a world where abortion was a crime,” Greenhouse said. But “in the early 1960s, there was not a single place in America where a woman could get a legal abortion unless there was a serious threat to her health.”

The emerging feminist movement saw abortion as a woman’s right to control her own body, with pioneer Betty Friedan in 1969 characterizing abortion rights as civil rights. The issue then was one of equality, not of privacy.

The Catholic Church began mounting vigorous opposition to the decriminalization of abortion during the late 1960s; at that time, Greenhouse said, evangelistic Christians were not “stalwarts in the anti-abortion” efforts.

Republicans began using abortion as a political issue at a time when the party was making inroads into traditionally Democratic Catholic strongholds. Patrick Buchanan, then part of Richard Nixon’s administration, pushed Nixon to promote anti-abortion policies, Siegel said. Buchanan may have been personally against abortion, she stressed, but it proved to be a potent political issue.

The Republican “assault book” against Democratic presidential challenger George McGovern in the 1972 campaign stressed the “triple A arguments” of “abortion, amnesty, and acid.” Nixon won by a landslide.

Republicans eased off the abortion issue after the election, perhaps, Siegel said, in part due to an August 1972 Gallup poll in which 64 percent of respondents said that abortion was a decision that should be left up to the woman.

Such details provide “a different model of the backlash” against abortion rights that emerged after the 1973 decision, Siegel said.

Moreover, it’s worth considering just what the Supreme Court justices understood when they were dealing with Roe v. Wade, the authors said.

“It’s a great puzzle what Roe means in 1973 and what it means under controversy in 1983, 1989, or 1992 or today,” Siegel said. Abortion has become “a social practice whose meaning evolves in history and it has come to play a highly symbolic role in our national political life.”

An estimated one-third of American women will have an abortion during their life and it remains one of the country’s most common surgical procedures, Greenhouse said. Studies also show that women are not psychologically damaged by the experience, she said.

“We don’t talk about that in a public space because we are supposed to be all sad about the fact that somebody had to have an abortion,” Greenhouse said.