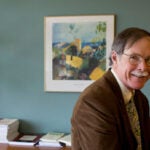 Tommy Amaker came to Harvard from big-time college basketball. After playing and coaching at Duke University, one of the country’s top teams and a national champion, Amaker became the youngest head coach in the history of the Big East Conference, leading Seton Hall to the Sweet 16 in the NCAA Division I Tournament. At the University of Michigan, a Big Ten stalwart, Amaker’s squad won the National Invitational Tournament (NIT) in 2004.

So how did he feel when he watched his team struggle through an 8-22 campaign during his first season at Harvard?

“I was very pleased,” he says. “When we were 8-22, we were trying to establish a style that requires a lot from our players. They were willing to work and listen and give their best.”

Two seasons later, Harvard men’s basketball has experienced a remarkable turnaround. After a 14-14 campaign in 2008-09 — during which the Crimson beat 17th-ranked Boston College and bested Ivy rival Penn for the first time in 20 years — Harvard posted a 21-8 record in 2009-10, its best ever.

“We were incredibly excited to reach the milestone,” says Amaker. “Not only did we win the most games, but it was probably the toughest schedule in the history of our program. I was very proud of our kids.”

Amaker attributes Harvard’s success to the commitment of the players, who have had to adjust to a fast-paced style in which blocks, steals, and turnovers on the defensive end lead to transition baskets. At the same time, he pointed to the critical contribution of one extraordinary player: Jeremy Lin ’10.

“Jeremy Lin’s impact was phenomenal,” Amaker says. “He led and drove our team.”

During his college career (2006-10), Lin became the first player in the history of the Ivy League to record at least 1,450 points, 450 rebounds, 400 assists, and 200 steals. He also played more games than anyone in Harvard men’s basketball history, and was among the top five in points, assists, and steals.

“Our system allowed Jeremy’s talents to come to the forefront,” Amaker says. “We create offense from our defense and get into transition quickly. It’s high-scoring, exciting, and entertaining basketball.”

Though he was undrafted after graduation from Harvard, Lin signed a two-year contract with the NBA’s Golden State Warriors in July. When the season starts and he steps on the court, he will become the first Crimson alumnus to play in the NBA in 57 years.

“Jeremy’s success speaks volumes for Harvard and the Ivy League,” says Amaker. “Playing in the NBA was his dream, but it was also a hurdle our program had to get over in order to attract quality recruits. It shows how we prepare and develop players. Now, there’s no barrier to entry. Jeremy shows that it’s possible to go to Harvard and play in the NBA.”

Last season, Harvard was one of three Ivy League teams to win 21 games or more. Cornell posted an astonishing 29-5 record and an equally impressive 13-1 mark in league play.

Amaker says he expects the fight for the Ivy championship and the conference’s only NCAA berth to be just as tough this year.

“Penn and Princeton have been the two pillars of our league forever,” he says. “Cornell has won the title three years in a row, with a tremendous effort last year in particular. Parity has seeped into a lot of conferences in college basketball, but especially in the Ivy League. It makes for an interesting time.”

While the team can’t expect to replace the contribution of a player like Lin, Amaker says Harvard will field a strong squad this season, led by last year’s Rookie of the Year, Kyle Casey ’13.

“Kyle’s a local kid and a sensational player,” Amaker says. “I’m hopeful we’ll see him grow and develop into our best player and our hardest worker, just as Jeremy was.”

Casey says that he’s up to the challenge and that he and his teammates will draw on their coach for motivation and intensity.

“Coach Amaker is hands-on,” he says. “He pushes to get the best out of us. That’s what I like. He’s defensive-minded. His energy flows right down the line through the coaches, the team, and the managers. If you look at his eyes, you can see the fire.”

“Brandyn ended last year on fire,” Casey says. “If everyone does their job, we’ll be fine without Jeremy.”

Looking to the future, Amaker understands the recruiting challenges at a school with Harvard’s academic standards and aging facilities. Still, he refuses to put a limit on how far the program can go, saying that he hopes one day to compete with top schools like Stanford and Duke.

“We can do that,” he says. “It’s the reason I came on board. Harvard is at the top of virtually every other category in higher education. There’s no reason why it can’t happen with athletics. We’re working, and a special program worthy of Harvard is our ultimate goal.”