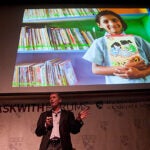 Margaret H. Marshall is a woman of firsts: the first to serve as chief justice of the Massachusetts Supreme Judicial Court, the oldest appellate court in the Western Hemisphere.

She was also the first female litigator at Choate, Hall, & Stewart — a century-old Boston law firm — and the first female vice president and general counsel at Harvard, a post she held from 1992 to 1996.

This week (Nov. 16), Marshall was not the first to deliver the Paul Tillich Lecture, a tradition since 1990 at the Memorial Church at Harvard. But she may have been the first to bring the ideas of Tillich — one of the 20th century’s most influential Protestant theologians — into the gritty, vital arena of America’s state courts.

That arena is in trouble, Marshall said — underfunded and understaffed to such a degree that Americans are beginning to question the justice of the justice system itself.

Other issues loom over state courts, too, she said, including declining access, an aging population, and — most of all — the growing sense that state courts are being rapidly politicized, and that justice may even be for sale.

“The American system of justice, particularly in our state courts, is in crisis,” said Marshall. “It is a crisis that if left unchecked will undermine the very principles of fairness and equality that sustain our democracy.”

Marshall, who grew up in apartheid-era South Africa and protested the system as a college student, has seen firsthand the consequences of a legal system devoid of equal protections for all. In 1965, she moved to the United States and studied at Harvard — first education (Ed.M. ’69), then art history (four years of doctoral work), and finally, the law. (Though she is a Yale Law School graduate, Marshall spent her last year of legal studies at Harvard.)

Friends know her as a measured person not given to exaggeration. But still, said Marshall, “The warning bell I sound this evening I ring with utmost urgency.”

And what’s the connection between troubled American state courts and Paul Tillich (1886-1965), a onetime World War I German army chaplain who was a University Professor at Harvard from 1954 to 1962?

For one, Tillich appreciated the pressure that real life exerted on the spiritual self, and on the idea of God. He was an existentialist Christian who embraced God as “the ground of being,” a concept of the divine that offered shelter from the existentialist idea of “nonbeing,” with its attendant despair over life’s apparent meaninglessness.

And for another, said Marshall, Tillich’s notions were brought to bear — dramatically — in one pivotal legal case. In 1965, the U.S. Supreme Court heard United States v. Seeger, the case of a young man who wanted conscientious objector status, but did not profess the required orthodox faith in God.

His lawyer (who won the case) evoked Tillich’s notion that God resides not in orthodoxy, but in whatever speaks to the depths of a person’s life — “what you take seriously without reservation,” said Marshall.

It is within these depths that we find “the core precepts that express our common humanity,” she said — and justice is one of them. The law, in Tillich’s phrase, is the “externalized consciousness” of a society.

“His passion for justice … is a passion close to my own heart,” said Marshall. “Like Tillich, I too have spent a great deal of time thinking about justice — but my perspective is eminently practical.”

It is the “everyday work of justice” that has her concerned — “the thousands upon thousands of daily interactions between people and their courts,” said Marshall.

Among the perils facing American courts, she said, is the “hinge notion” of a court’s neutrality — a facet of American justice that has been taken for granted for 200 years.

That neutrality is a promise, said Marshall, quoting Supreme Court Justice Anthony Kennedy, and “if the promise gets broken, the law as we know it ceases to exist.”

Adding weight to the troubles courts face — especially state courts — are the “sheer numbers,” said Marshall. In 2008, the latest year for which data is available, there were 325,000 cases filed in U.S. federal courts (not including bankruptcy cases). But in the same year, 48.5 million non-traffic cases were filed in state courts.

Here is Tillich’s notion of what is “between law and actual encounter,” said Marshall — an estimated 100 million Americans before the bar in just one year, in state courts alone. This interface is where life’s most fundamental issues are on display, said Marshall: life, death, crime, family, and housing.

Yet state courts are often where decisions are made that stir society at large. A state court heard the first case on a runaway slave (1780), which led to the first state to call for abolishing slavery (Massachusetts); the first court case on miscegenation (California, 1948) — an opening shot in legal arguments that were finally settled by the Supreme Court in 1967; and — of course — Goodridge v. Dept. of Health (Massachusetts, 2003), a 4-3 ruling that held a state could not deny marriage to same-sex couples.

That case, said Marshall, is one of the two “tags” always associated with her name. (The other is becoming the first woman chief justice in Massachusetts.)

“We continue to trust” that justice will be done, she said, but that trust is also being undermined by declines in court funding. Cash-strapped California, she said, has closed state courts on one business day a month. In Massachusetts, where 100,000 people arrive at 100 state courts a day, 70 percent of those courts are limping along with skeletal staffs. And yet, said Marshall, state courts “are the legal equivalent of emergency rooms.”

Meanwhile, access to American justice is in decline, said Marshall, who likes Tillich’s notion that the law should hear voices both “small or loud.”

“State courts are where our most vulnerable citizens — people who call on us with small voices — come to seek access to their most basic needs: food, shelter, health care, physical safety,” she said. Yet often they have no lawyers, said Marshall — as many as 80 percent in divorce courts and 90 percent in some state housing courts.

Other claimants have no translation services, or help with functional illiteracy — or simply face stairs too steep to climb. Without reform, said Marshall, state courts will go on “a backward trajectory.”

Then there is the fact that America’s population is aging — that soon 25 percent of us will be over 65. Yet seniors face courts less able to process cases related to benefits claims, age discrimination, and guardianship. Without reforms, she said, the elderly face “the equivalent of barring them” from justice.

“But all of this takes money,” explained Marshall. “The states do not have it and the U.S. does not supply it.”

Of all these threats to American courts, though, the greatest is the perception that courts are no longer neutral, but are subject to the same political pressures as any legislature. In 39 states, said Marshall, all or most members of the appellate and trial judiciaries are elected.

Between 2000 and 2009, election races for state supreme court justices cost $206.9 million, and one Illinois contest alone, in 2004, cost two candidates $9.4 million — “staggering sums,” said Marshall, which have led to “a growing perception that justice in our state courts is for sale.” (Three in four Americans believe campaign cash affects court decisions, she added.)

And what would Tillich make of what Marshall called “this ugly and dangerous turn — an attempt to destroy the very neutrality of courts”?

He would “act for justice,” she said, and would urge, with her, that jurists maintain their spine and independence, and their neutrality within the law.

Marshall quoted Tillich, whom she credited for helping her survive “the juggernaut of apartheid” in her youth: “In every act of justice,” he wrote, “daring is necessary and risk is unavoidable.”