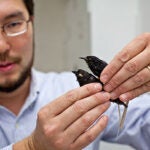 Projections suggest obesity among U.S. adults may not plateau until 2050

Their work, published this week in the journal PLoS Computational Biology, runs counter to recent assertions by some experts that the obesity rate, which has been at 34 percent for the past five years, may have peaked. An additional 34 percent of American adults are overweight but not obese, according to the federal government’s Centers for Disease Control and Prevention.

The Harvard scientists say that their modeling shows that the proliferation of obesity among American adults in recent decades owes in large part to its accelerating spread via social networks.

“Our analysis suggests that while people have gotten better at gaining weight since 1971, they haven’t gotten any better at losing weight,” says lead author Alison L. Hill, a graduate student in Harvard’s Program for Evolutionary Dynamics, Biophysics Program, and at the Harvard-MIT Division of Health Sciences and Technology. “Specifically, the rate of weight gain due to social transmission has grown quite rapidly.”

The projections by Hill and colleagues are a best-case scenario, meaning that America’s obesity rate could rise above 42 percent of adults. One silver lining is that their model suggests the U.S. population may not reach this level for another 40 years, making the future rate of increase much more gradual than over the past 40 years. Only 14 percent of Framingham Heart Study participants were obese in 1971.

Along with co-authors David G. Rand, Martin A. Nowak, and Nicholas A. Christakis, Hill broke down the spread of obesity into three components:

● the rate at which obesity has spread through social networks, via transfer from person to person;

● the rate of nonsocial transmission of obesity, such as through easier access to unhealthy foods or increasingly sedentary lifestyles;

● the rate of “recovery” from obesity, defined as weight loss sufficient to push body mass index (BMI) back below 30.

“We find that while nonsocial transmission of obesity remains the most important component in its spread, social transmission of obesity has grown much faster in the last four decades,” says Rand, a research scientist in the Program for Evolutionary Dynamics and a fellow in Harvard’s Department of Psychology and Berkman Center for Internet & Society.

Hill, Rand, and colleagues found that a nonobese American adult has a 2 percent chance of becoming obese in any given year — a figure that has risen in recent decades — and that this number rises by 0.5 percentage points with each obese social contact, meaning that four obese contacts doubles the risk of becoming obese.

By comparison, an obese adult has a 4 percent chance of losing enough weight to fall back to merely “overweight” in any given year. This figure has remained essentially constant since 1971.

“These results suggest that social norms are changing the propensity for becoming obese by nonsocial mechanisms, and also magnifying the effect that obese individuals have on their nonobese contacts,” the scientists write in PLoS Computational Biology.