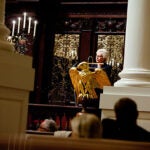 U.S. Supreme Court Chief Justice John G. Roberts Jr. ’76, J.D. ’79, joked with a crowd in Austin Hall that he determined from the start of his time at Harvard Law School (HLS) to be part of its historic moot court event.

“I decided very early on in my first semester that I wanted to participate in an Ames final,” said Roberts, “and I decided the easier way would be to get appointed chief justice.”

Established in 1911, the Ames Moot Court Competition unfolds in three rounds over the course of two years and challenges students to develop briefs and oral arguments addressing legal issues that the Supreme Court has not addressed or answered on-point.

Two teams of six advance to the final of the competition, where two HLS students from each team argue a case before a panel consisting of three distinguished judges.

This year’s final hypothetical case concerned the plight of Kermit McBride, a disgruntled blogger turned hacker. The defendant was found guilty of sabotaging the computer screens and ticker on the trading floor of the “Ames City Exchange,” with the message “The Taxpayers Demand a Refund. Or Else …”

After he was charged, it came to light that evidence discovered by a local police officer in McBride’s home, which the officer then fed to the FBI, was not obtained with a search warrant. The district judge refused to suppress the evidence that was later found by the FBI with a legal warrant, but that had been based on the tip from the local officer. In addition, upon sentencing, the district judge required that McBride be barred from using computers for a period of three years.

The case explored whether the evidence obtained by the FBI should have been admissible when the evidence supporting the issuance of the warrant was obtained during a warrantless search, and if the district judge overstepped by imposing a ban on McBride’s use of computers during a three-year, supervised release.

The moot proceedings offered insight into the judicial thought process, as well as an idea of the vast knowledge needed to argue a case at the circuit and Supreme Court levels. Not to mention an appreciation of the nerves of steel it takes to argue before the nation’s highest courts, where, if the moot court was any indication, arriving unprepared is simply not an option.

The justices were quick to interrupt each oralist, challenging and countering the students’ arguments with probing questions and references to previous cases and opinions pertinent to the one before them. They effortlessly took both sides of the issues being argued.

Later Roberts took the other side of the argument, challenging the length of the district court’s decision, noting that the district judge never gave an explanation for why it imposed a computer ban during the three-year term of supervised release.

Before delivering the panel’s decision, Roberts praised the competitors. “We were very, very impressed by the briefs and the advocates,” he told the audience of HLS students, staff, and faculty.

Roberts commended the students for effectively using language from actual Supreme Court opinions, “controlling the argument,” not getting “dragged into a detour” with arguments irrelevant to the case at hand, and even correcting him at one point when he misspoke about a particular statute.

Bringing some humor to the proceedings, Roberts lauded HLS student David Denton, a member of the team representing the United States, for using Roberts’ own wording in answer to a question from the chief justice.

“It was done beautifully. A little bit more intonation in your voice and it would have been offensive. I don’t mean that facetiously at all — it wasn’t,” Roberts said, over a roar from the crowd, adding, “It was very effective.”

The judges gave the best brief award to the petitioner (those arguing for McBride) and the best oralist award to Denton.

“As you might imagine, given that division, it was a very difficult call for best overall team,” Roberts said, “but we decided that that title goes to the petitioners.”