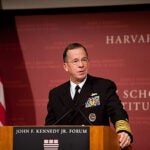 “Strange Bedfellows: The Politics of Education and the Future of Reform” drew a crowd to the Institute of Politics’ (IOP) John F. Kennedy Jr. Forum. The event’s name was somewhat ironic, given the ease and agreement with which the big-name panelists dove into the major education issues of the day.

“It’s like we have Mick Jagger, Bruce Springsteen, and Tina Turner together on the same stage,” said moderator Margaret Spellings, secretary of education under George W. Bush. (For the many undergraduates in the audience, Spellings translated her reference to Jay-Z, Justin Bieber, and Lady Gaga, drawing laughter.)

The panelists discussed how to use business-style organizational reform to improve America’s worst-performing schools. Among the ideas promoted were merit-based pay and promotions for teachers, giving school principals more control over funds, and scrapping states’ teacher certification processes in order to draw the best midcareer professionals into the classroom.

Currently, “we don’t want to differentiate among teachers,” Rhee said. “If you tell a teacher they’re not doing a good job, it’s like you’re attacking the entire profession.”

The evening began with an assessment of Rhee and Bush’s rocky but productive tenures working with the D.C. and Florida schools. Rhee in particular was punished by her District constituents, who voted out her boss, Mayor Adrian Fenty, in this year’s Democratic primary. Bush now runs the Foundation for Excellence in Education; Rhee said she is unsure of her next move.

The primary lesson from their time in office, they said, was that playing politics is more effective than playing nice if one wants to achieve reform.

Bush took pride in his stance toward teachers’ unions and school districts, calling it “Jeb’s Way.” During his tenure as governor from 1999 to 2007, Florida’s high school graduation rate jumped from 60 percent to just shy of 80 percent, he said.

“I made education the chief political issue before I made it the chief policy issue,” said Bush, who is finishing a weeklong visiting fellowship at IOP. “If you have a passion for something, you shouldn’t keep it a secret.”

After her first two years in office, Rhee said, Washington was leading the nation in gains in both math and reading on the national NAEP exam. But she and Fenty were voted out for failing to “figure out the political dynamic,” she said.

The speakers agreed that America’s public schools lack a grass-roots base to demand reform.

“The problem is there is no organized interest group in this country that defends and promotes what’s right for kids,” Rhee said.

“You need to create a political constituency around the children’s success,” Bush said. He called for a nationwide political campaign to “put a face” on the price of failures in the U.S. education system.

The panelists also discussed the political climate for education reform and how it might change with a newly divided Congress. Podesta, director of the Center for American Progress in Washington, repeatedly called for sustaining the “political momentum” for education reform created by No Child Left Behind. (Even Spellings, one of the chief architects of NCLB, said the law has become “radioactive” politically.)

“The middle’s been hollowed out in this Congress,” Podesta said. Despite partisan tension, he said, there might still be majority support for building accountability into the system.

“I think this idea that you can use an incentive to create change through competition among the states will catch on,” Podesta said. “You can use relatively scarce dollars to move things along more rapidly.”

While competition for the money has appeared to energize some of the worst-performing states, the panelists said, money alone will not fix the education system.

“Budget cuts could be used as an opportunity … to push some significant changes in these age-old, dinosaurish policies,” said Rhee, cited hiring, salary, and layoff practices that favor teachers with seniority, despite, she said, no demonstrable evidence that more experience in the classroom equates to better teaching.

“The answer isn’t always money,” Bush said. “There needs to be a compelling story.”

Where should reformers turn to find that compelling narrative? In the night’s first real instance of strange bedfellows, Bush said that Obama could be the person to sell education reform to the public as a national priority.