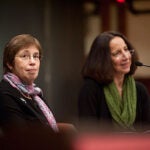 Devotee of international literacy calls himself ‘Carnegie with a yak’

Typically, presenters at Harvard University are sure of their place on the dais. “I am up here a little bit accidentally,” philanthropist John Wood told a crowd at the Harvard Graduate School of Education’s (HGSE) Longfellow Hall on Thursday (Nov. 4).

Although his story had a serendipitous start, Wood’s success as the founder of one of the world’s fastest-growing nonprofits, Room to Read, is no accident. In 2000, Wood founded the organization dedicated to educating children in the developing world through initiatives on literacy and gender equality in education.

A drive to excel, to help others, and to work with a proven model has been a winning combination for Wood, a former senior Microsoft executive who discovered a higher calling while in Nepal in 1998.

On a trek through a remote Himalayan village, Wood met a local headmaster who invited him to his school. The businessman was shocked at the dilapidated building and lack of books, merely 20 books in the school library for more than 450 students. The books were locked up to “protect them.”

“What chance did these kids have?” Wood wondered.

He was moved by the words of the headmaster, who told him, “We are too poor to afford education in Nepal, but until we have education we will always be poor. … Perhaps someday, sir, you will come back with books.”

Wood did go back. What began as a return trip to the small town with books for the little library has blossomed into a multinational effort to build schools, libraries, and literacy programs in South Asia and Africa. In 10 years, Room to Read has opened 1,000 schools, provided 10,000 long-term scholarships to girls, and opened more than 10,000 bilingual and multilingual libraries, serving more than 4 million children.

Wood’s concept is based on the work done by Scottish-American industrialist Andrew Carnegie a century ago, when he used part of his massive fortune to create thousands of public libraries. Through such efforts, Carnegie helped to transform the nation’s educational landscape.

“My goal is basically to be Carnegie with a yak,” said Wood, who carted his first loads of books to the Nepal village on the backs of several of the wooly animals.

Wood’s work to create a global educational network is based on building local capacity, keepings costs down, and setting bold goals.

“Don’t spend money on things you don’t have to,” he told the crowd, noting that he asks executives to donate their frequent-flier miles, and that his nonprofit has a no-Land-Rover policy. The cost of just one of the pricey, four-wheel-drive vehicles, he said, is the equivalent of cheating 300 girls out of an education. Wood challenges everyone involved in Room to Read to find one way to “help us to cut costs out of the system.”

Another core strategy for the group is the development of government and community support. Working with the education ministries in each country, Room to Read uses only indigenous teams of educators, librarians, and teachers. Local communities donate land for the libraries and school projects, and parents erect the buildings themselves.

“It is the parents and the government and the local citizens taking charge of their own initiatives,” said Wood, who hopes his organization will help 10 million children by 2020.

Societies don’t pick themselves up out of poverty because of foreign aid, he said. “Foreign aid is like the drug that you stay addicted to,” said Wood, who referred to his work as a “hand up,” instead of a “handout.”

“What does get societies out of poverty,” he said, “is education.”