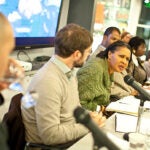 Two famous comedic brothers, countless students, and one night of insight and offbeat hilarity were all part of the mix on Monday (Nov. 22) at Kirkland House.

In an event hosted by the popular series “Conversations with Kirkland” and Harvard’s Office for the Arts’ Learning from Performers program, filmmakers Peter and Bobby Farrelly, famous for their slapstick, off-color comedies such as “There’s Something About Mary” and “Me, Myself & Irene,” discussed their successes and failures in show business, and offered the crowd tips on what it takes to make it in Tinseltown.

Natives of Cumberland, R.I., they quit their day jobs in the 1980s and headed to Hollywood, intent on breaking into the business. “We literally just read from a book about how to write a screenplay and started writing,” said Bobby.

After a decade of almost-made projects and rejected scripts, they were close to giving up when they hit it big with the 1994 comedy “Dumb & Dumber,” starring Jim Carrey and Jeff Daniels. Their break came when a producer suggested they stop trying to find a director for their film and simply direct it themselves.

“It hadn’t really occurred to us, because we didn’t really know what a director does,” said Bobby. “We didn’t know when to yell ‘action,’ ” added Peter, “but we understood what we wanted.”

The brothers, who feared they would be exposed as frauds, decided to hire smart people around them and not profess any knowledge of the role of director. Their jury-rigged plan worked. “We figured they were going to come in and broom us and put a real director in, and they never did,” said Peter.

Trusting in themselves has proven a successful formula for the brothers, who also said working in tandem has helped them to navigate the pitfalls of major movie studios that push to make a film the way they want it.

“You hold each other [and your ideas] up. And it’s a huge advantage having a brother who is your partner who you also know has your best interests,” said Peter. “You are defending each other.”

Asked if they bend their humor toward demographics, they said that while their jokes often tend to fall into the “teenage boy” category, they target their own sense of humor above all.

“The first thing we do is to try to make sure that we think it’s funny,” said Bobby.

“Yes, teenage boys come into it,” added Peter, “only because I think that’s what appeals to us.”

They developed the script for their popular 1998 film “There’s Something About Mary” from an original concept borrowed from a couple of friends, and chose to break with the PG-13 rating assigned to most comedies then. “We said … let’s go nuts,” recalled Peter of their decision to push the envelope with the R-rating.

But in the end the movie worked, like many of their films, they said, because the story is fundamentally uplifting.

“At the heart, almost every story we do is a sweet story, and it’s a story that has a good message. It’s just [that] it’s disguised by the big gags,” said Bobby.

To conclude, the Farrellys screened a clip with Kate Winslet and Hugh Jackman from a forthcoming film project titled “Movie 43.” If the reaction from the crowd was any indication, die-hard Farrelly fans will not be disappointed.