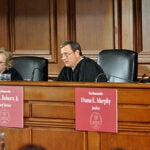 Harvard analysts look ahead to new Congress’ agenda and to 2012

Blue Dog Democrats are out; tea party Republicans are in. The days of a unified Democratic majority in Washington are gone, to be replaced by a GOP-controlled House, weakened Democratic control of the Senate, and, undoubtedly, two years of headaches for President Obama.

In the wake of this month’s midterm elections, several of Harvard’s political observers said, the capital is gearing up for showdowns on fiscal reform, economic growth, and a host of other issues, with a distant eye toward Obama’s likely re-election bid in 2012.

“We’ll have between 95 and 97 new members of Congress, and that’s a very high turnover,” said David King, a lecturer in public policy at the Harvard Kennedy School who has run the Institute of Politics’ (IOP) Program for Newly Elected Members of Congress since 1996. “A third of the Republican caucus will be new. It’s a big change, and it’ll be a very big challenge for the leadership, especially for the Republican Party.”

What can the public — not to mention new members of Congress, who arrive at Harvard on Nov. 30 for five days of bonding and a political crash course — expect over the next two years?

For starters, King said, it’s time to lower the expectations for Congress’ output. Blockbuster legislation like the stimulus bill or health care reform won’t be coming down the pike anytime soon.

“The first two years of the Obama administration were the most productive of the past 40 years, since Lyndon Johnson,” King said. “Anything would look like a massive slowdown and gridlock compared to those two years.”

Most analysts agree that kick-starting the economy, particularly by promoting job creation, must top Congress’ agenda.

“Republicans might misread the tea leaves here and think they’ve been given a mandate to enact sweeping change,” cautioned Stephen Ansolabehere, professor of government in the Faculty of Arts and Sciences. “But voters just want the economy to be addressed.”

The Bush administration tax cuts are set to expire at the end of this year, and many analysts believe they’ll be extended before the current Congress leaves office. But with the president’s bipartisan debt-reduction commission set to release its report on Dec. 1, the timing could be right for a major fiscal overhaul, Ansolabehere said.

“The big goal is to do something comparable to the Tax Reform Act of 1986 and completely restructure the tax code,” he said, referencing the sweeping legislation that lowered and simplified income taxes for many Americans.

The commission released an early outline last week that met fierce resistance and debate from both parties. The outline, which included calls for ending tax breaks, cutting domestic spending, and increasing the retirement age for Social Security, was comprehensive, said Linda Bilmes, Daniel Patrick Moynihan Senior Lecturer in Public Policy at the Kennedy School, adding the caveat that it did not sufficiently address wasteful defense spending.

“For a long time, a lot of the discussion in Congress [about reducing debt] has focused on the overt spending, but not on hidden spending such as tax deductions,” she said. “We’re spending a ton of money on mortgage deductions and other tax breaks.”

Bilmes will address those and other issues at a budgeting workshop for newly elected members of Congress that she conducts through IOP.

“You have a lot of” new members “who ran on a platform of tackling the deficit and the economy,” she said. “They’re going to be keen to understand, at Harvard and going forward, what different levers they can use to get a grip on the deficit.”

The next two years may also bring incremental changes to health care reform, according to Elaine Kamarck, a Kennedy School lecturer in public policy and a Clinton White House veteran.

Republicans will have to make a down payment on their recent promises to rein in government spending and roll back health care reform, Kamarck said. The two most contentious elements of last summer’s health care bill — the mandate requiring individuals to purchase health insurance, and government subsidies for low-income individuals, which will be funded primarily by Medicare cuts — could be delayed beyond 2014 or rescinded if Republicans have their way, she said.

Foreign policy will most likely dominate Obama’s agenda, according to King. “The president has far more authority on foreign policy” than on domestic policy, he said, and without Congress’s guaranteed support, Obama would be more successful tackling diplomatic issues in the Middle East, Japan, and China. “China is a foil for American politics right now,” he said. “There will be no gridlock with respect to our policies toward China.”

After an election that swept in nearly 100 new members, including 39 who have never held public office, will voters finally see the “change” in Washington that many sought? Don’t bet on it, said Richard Parker, a lecturer in public policy and a senior fellow of the Joan Shorenstein Center on the Press, Politics and Public Policy. Democrats may have already made a public misstep by keeping Senator Harry Reid of Nevada and Representative Nancy Pelosi of California in the leadership roles. “They’re trusted in Congress, but both have been so successfully tarred by their opponents that outside Washington it looks like the Democrats haven’t gotten the change message” from voters, Parker said.

“Americans have been voting for change — for an overturning of politics as usual — for over 40 years now,” Parker said. “But they’ve never found the answers they want. Their willingness to go back and forth across parties looking for solutions tells me they still think something is deeply wrong and that our political system is still broken.”