Being black in Western art 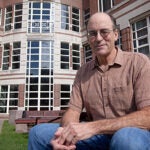 A master at his craft

How have people of African descent been depicted in Western art and why? A comprehensive research project and photo archive at Harvard’s W.E.B. Du Bois Institute for African and African American Research seek to answer those sweeping questions.

“The Image of the Black in Western Art” is based in the efforts of the French couple John and Dominique De Menil, human rights champions, art enthusiasts, and philanthropists who, reacting to U.S. segregation in the 1960s, began the process of documenting the depiction of individuals of African ancestry in the West, creating a five-volume series of illustrated works.

In 1994 their project was handed over to the Du Bois Institute, which now houses the archive of 26,000 photographs of artworks in all media, and offers expanded access to outside researchers. The institute and the Harvard University Press are collaborating on updates of the five original books, and on five additional ones.

Calling the reissue of the originals and the new volumes a “historic event,” Vera Grant, the institute’s executive director, said the works include updated color photographs of the previous mostly black-and-white images, as well as new scholarly research and commentary.

“Everything that’s in the books has been ramped up to another level,” said Grant, adding that they will allow people to “feast their eyes on images that have really not hit the mainstream before.”

“The scholarly text from the 1970s, ’80s, and ’90s that interpreted those images has now been readdressed to focus on current scholarship on images of blackness, which has changed substantially over the last 20 years.”

Other volumes will be published in the spring and the fall of 2011. In addition, the Du Bois Institute and Harvard University Press will publish two new volumes on the 20th century in 2014/2015.

On Monday (Nov. 15), several scholars involved in republishing the first four volumes took part in the M. Victor Leventritt Symposium on “The Image of the Black in Western Art” at Harvard’s Barker Center.

Jeremy Tanner of University College London explored the concept of race and representation in ancient art, noting that certain Roman art depicting black people also may have conveyed conformity “to the semantic norms of the dominant social and racial group.”

He noted that Roman sculptures of black people of high status, those identified by Frank Snowden, a major scholar of blacks in antiquity, were done in white marble. “These elite blacks certainly did not identify themselves as black in their choice of marble, perhaps because such an image would have seemed just too close for comfort to the black marble images of servants and slaves.

“The different character and saliency of racial prejudice and racial stratification in the societies of antiquity compared with Western modernity should not be mistaken for their absence,” he added. “Rather, racial prejudice and racial stratification were simply differently configured, both socially and culturally. The visual arts of antiquity, appropriately read, offer some of the most revealing evidence for delineating the configurations of ancient racism, which they participated in constructing as active material agents.”

“This is one of the truly great archival projects in the history of African, African-American studies, and the history of art,” said Henry Louis Gates Jr., Alphonse Fletcher Jr. University Professor and director of the institute. “I am honored that at Harvard it is being reborn and completed at the Du Bois Institute and published by the Harvard University Press, and fulfills the great dream that Neil Rudenstine had when he brought it here in the first place.”

Gates and David Bindman, the 2010 Sheila Biddle Ford Foundation Fellow at the institute and emeritus professor of the history of art at University College London, edited the new collection and contributed a preface for the series.