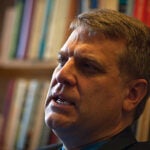 The John F. Kennedy Jr. Forum was packed to the rafters Wednesday evening (Nov. 17) as the Harvard Kennedy School and its Institute of Politics hosted a public address by America’s highest ranking officer, Adm. Mike Mullen, now in his second term as chairman of the Joint Chiefs of Staff.

In that role, the 46-year Navy veteran is the chief military adviser to the president, the Secretary of Defense, the National Security Council, and the Homeland Security Council.

Mullen, in a uniform tight with braid and medals, opened his remarks on a democratic note — calling on all those who are serving in the military, or who have served, to stand for a round of applause. At least half the crowd at the forum’s floor level rose from their seats.

Applause also followed a brief introduction by Harvard President Drew Faust, who took the opportunity to make a clear statement about her desire to have the Reserve Officers’ Training Corps (ROTC) program recognized on campus.

That will be possible, she indicated, once the policy excluding gays from the military — or forcing them to lie about themselves — is abolished.

“I want Harvard to be able to embrace both integrity and opportunity, both service and inclusion,” said Faust. “I want to be the president of Harvard who sees the end of ‘Don’t Ask, Don’t Tell’ because I want to be able to take the steps to ensure that any and every Harvard student is able to make the honorable and admirable choice to commit him- or herself to the nation’s defense.”

Mullen, who is opposed to a “Don’t Ask, Don’t Tell” policy that encourages dishonesty, indicated the military would welcome an ROTC chapter at Harvard. “I think it’s incredibly important,” he said later, “to have ROTC in institutions like this.”

As for the policy itself — the subject of a Pentagon study since March — the best solution would be one that is done “congressionally,” he said.

The wars in Afghanistan and Iraq — present and difficult — get all the attention, said Mullen, but thinking about the future of the military is important, too. He outlined three conclusions he has reached about the proper use of military force: That it is a good “first tool” in resolving conflicts, but never the only one; that when force is used it should be in a way that is “precise and principled”; and that military force should be “iterative” — in line with — political action.

The last point was at the heart of Mullen’s brief address, “The Interplay of Policy and Strategy.”

Most wars are marked by this interplay, flexibility, and change, said Mullen, who offered a few examples. Lincoln waited until midway through the Civil War to free the slaves — when it provided a material advantage to Union forces. Truman, determined to open the whole Korean peninsula after battlefield successes in 1950, changed course when massed Chinese troops changed the balance.

“War is not predetermined, nor is it linear in shape,” said Mullen, who began his career as an anti-submarine officer off the coast of Vietnam. “War is discovery of the most lethal sort.”

The interplay of strategy and policy in war requires the United States to be flexible to new facts and conditions — to “sense and adjust” along the way, he said.

Mullen praised President Obama for “his understanding of the changing nature of war,” and said that in Afghanistan and Iraq, for now, “we have the right resources in place, and the right leaders in charge.”

He added that the emphasis in those war zones has shifted from defeating Al Qaeda to training police and armed forces as combat strategies make way for policies that encourage development and good governance. But any advances, said Mullen, remain “fragile and reversible.”

The admiral also touched on two other realities of war: money and the consequences of battle once veterans return home.

As for the first: “Wars are seldom won on the cheap,” said Mullen. In 1940 dollars, World War II cost $300 billion — but that is the equivalent of $5 trillion today.

In present-day U.S. wars there is a human toll that will play out over decades — and only some of that toll will be helped by what Mullen called “the sea of good will.”

The fate of veterans will be “the defining public policy issue of our era,” he said — with stakes “that go beyond the comfort of the classroom.”

During a question-and-answer session, Mullen acknowledged that civilian casualties are “a hugely impactful issue,” and that such casualties can create more terrorists. “Our desire is not to create more,” said Mullen. “In reality, we can’t kill our way to victory.”

The war zones occupy “80 percent” of his time, but there are other concerns. Among them are the possibility of nuclear weapons in Iran and the mystery of the Chinese military, which invites little cooperation with American forces. “I can’t divine what their strategic interest is,” Mullen said. “That has us concerned, and everybody in the region concerned.”