A friend in the Middle East 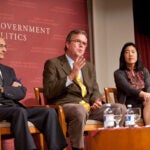 The diplomatic challenges facing the United States in the Middle East are myriad: Iran’s nuclear program, a terror-fueled Yemen, a barely stable Iraq, and a war in factionalized Afghanistan compete for attention against the long conflict between Israelis and Palestinians.

If American leaders want help disentangling — and possibly even solving — these complex problems, they should look to Saudi Arabia for leadership, said Prince Turki Al Faisal, former ambassador to the United States, in a talk at the Harvard Kennedy School (HKS) on Friday (Nov. 19).

In his talk, “A Saudi Foreign Policy Doctrine for the New Decade,” Turki envisioned a U.S. foreign policy in the Middle East anchored by the longstanding, stable relationship between the United States and Saudi Arabia, the region’s economic powerhouse and the birthplace of Islam.

“If the world truly wants peace in the Middle East, it should reach out to the outstretched hand of King Abdullah,” the prince said, calling for the creation of a zone free of weapons of mass destruction. Saudi Arabia “hopes to present the world with a steady diplomatic hand backed by growing economic and financial might.”

A Georgetown–educated diplomat, former chief of Saudi intelligence, and current chairman of the King Faisal Centre for Research and Islamic Studies, Turki was a fitting conduit for the message of Mideast-West collaboration, said moderator R. Nicholas Burns, professor of the practice of diplomacy and international politics at HKS.

The event, co-sponsored by the Harvard Kennedy School’s Institute of Politics (IOP) and the Belfer Center for Science and International Affairs’ Middle East Initiative, was part of Harvard Arab Weekend. Turki’s talk was one of several hosted by the Harvard Arab Alumni Association and other University Middle East-North Africa groups to address how the Harvard community can tap into and promote the region’s growth.

Turki pitted Iran and Saudi Arabia as polar opposites vying for power and influence in their region. Both countries view themselves as cultural and religious hubs, he said, but disagree on how to use that influence: Iran wants to stand up to the West, while Saudi Arabia hopes to bring the West and the Middle East together.

While acknowledging the grave threat posed by a nuclear Iran — a likely reality within the next year, he said — Turki expressed confidence that the region would not fall to Iranian influence.

“Iran’s major weakness is demographics,” he said. He pointed out that the majority of Iranians are Shiite Muslim and ethnically Persian, “and thus ethnically and linguistically distinct from most of the region.” Contrary to Saudi Arabia, the “cradle of Islam,” Iran faces an uphill battle in aligning itself with its predominantly Sunni Arab neighbors.

Furthermore, Iran has isolated itself from the international community, he said.

Turki also stressed the necessity of solving the Israel-Palestine conflict, which he called “the most important issue in the region.”

“Israel’s unwillingness to cease its … colonization and its continued refusal to grant the Palestinians their own homeland is the core reason this conflict continues,” he said.

“There is no lack of proposals for peace, many of them completely rational, fair, and viable,” he added, citing a peace plan endorsed by Saudi King Abdullah at the Beirut Summit in 2002 that called for the creation of a sovereign Palestinian state in the West Bank and Gaza.

Turki called on Washington to push Israel to work toward peace.

“The only country that can affect Israeli foreign policy, in my opinion, is the United States,” he said.

While he was encouraged by President Obama’s declaration that “the Palestinian-Israeli conflict is an issue of national security,” he said he hoped the president would engage with Saudi Arabia and other Middle Eastern nations on the issue.

“Israelis have the advantage over us when it comes to [American foreign policy] decision making,” he said. “That should not give us reason to prevent us from matching it.”

Stabilized relations between the United States and predominantly Arab nations cannot occur until the Israel-Palestine standoff is settled, he said.

“Fixing that problem will go a long way toward the deficit in America’s image,” he said.