Where men have more than one wife 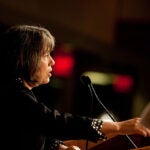 American banks: On the mend

Not long after the terrorist strikes of Sept. 11, 2001, Al Gore visited Harvard to speak with faculty members about the causes behind the attacks and to explore how to prevent such attacks from happening again.

Harvard researcher Rose McDermott remembered that one academic in the room made a bold statement, one that piqued her curiosity and led her to a decade-long research project.

McDermott recalled that Richard Wrangham, Harvard’s Ruth Moore Professor of Biological Anthropology, said the issue was about “the political ecology of the control of women by men,” male management of female reproduction, and the notion that female independence undermines male power in patriarchal and pastoral societies.

Intrigued, McDermott, the Katherine Hampson Bessell Fellow in Political Science at the Radcliffe Institute for Advanced Study, chose to examine polygyny, the practice where one man is married to a number of women, as a proxy mechanism for male control over female reproduction and the connection between such control and violence.

There are various reasons why polygyny might be tied to violence, said McDermott, who is also a professor of political science at Brown University, during a talk at the Radcliffe Gymnasium on Oct. 20. Paramount among them is the idea that the practice is significantly influenced by wealth.

“What you have are wealthy men who have lots of wives, and then poor men who can’t get any wives … they are sitting around with not much to do, a lot of testosterone, and that can get them into trouble,” she said, adding that young, unmarried men make up the group most statistically prone to violence.

Additionally, said McDermott, there is an increased likelihood that the governments in countries with high populations of young, unmarried men are repressive regimes.

“Those governments need to be able to control those forces that might otherwise unseat them from positions of power,” she said, adding that such conditions result in young men being pressed into military service to fight other countries, instead of turning on their leaders at home.

The negative effects of polygyny are “dramatically, clearly predictable,” said McDermott, and include girls getting married younger, greater health problems for mothers and their children, increased domestic violence, and a decline in primary and secondary education for both girls and boys. Countries that are highly polygynous also spend more money on weapons, and suffer declines in political and civil liberties.

Ultimately, making changes in such societies can be very challenging, largely because of the cultural norms.

Conventional empowerment techniques such as education don’t always work, “because they take place in a particular political ecology,” said McDermott, adding that under such patriarchal control, men have the ultimate say over when and if women receive education as well as how much education.