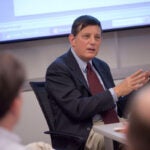 The foreign minister of Pakistan had a blunt message for the United States: No matter how much aid you give us, if you do not respect Pakistan’s sovereignty, if you launch unmanned drone attacks over the border into our territory, you risk alienating your most important ally against Middle Eastern terrorism.

“In the battle for the hearts and minds of the people of Pakistan, Kerry-Lugar [a Senate bill that tripled relief to Pakistan] is one step forward,” said Makhdoom Shah Mahmood Qureshi during an address at the John F. Kennedy Jr. Forum at the Harvard Kennedy School (HKS) on Monday (Oct. 18). “Massive flood relief is one step forward. But drone and helicopter attacks on our territory and people is two steps back.”

At times stern but also respectful and even hopeful about the future, Qureshi sketched a blueprint for strengthening America’s relationship with Pakistan.

This is vital for both countries, Qureshi emphasized. As R. Nicholas Burns, professor of the practice of diplomacy and international politics at HKS, said in introducing Qureshi: “Of the 192 member states of the United Nations, no country is more important to our country — to global peace and security — than Pakistan.”

The two countries “have a strong friendship and a long friendship, but it is also a complex friendship, not without its misunderstandings, disagreements, and strategic dilemmas,” Burns said.

Americans need only look back to 1989 to understand why Pakistanis have a deep distrust of U.S. commitment, said Qureshi, who was in the United States for the third meeting of the U.S.-Pakistan Strategic Dialogue, to be held in Washington with Secretary of State Hillary Clinton. In 1989, the Soviet Union withdrew from its occupation of Afghanistan, driven in part by guerrilla mujahideen forces funded by the United States.

“The United States, victorious, left on the next bus,” he said. The radicalization and extremism that followed “was neither unexpected nor unpredicted.”

Benazir Bhutto, the slain opposition leader, warned the first President Bush about the mujahideen, who became the springboard for the Taliban and al-Qaeda, Qureshi said. “I’m afraid we have created a Frankenstein that will come back to haunt us someday,” Bhutto told Bush.

“Washington has fallen in love with every Pakistani military dictator and done little to help elected civilian governments solve the country’s economic problems,” said Qureshi, whose long political and public service career includes acting as spokesman for Bhutto in 1996.

Thus, “The people of Pakistan see a half of century of evidence of the U.S. dancing with dictators who subverted human rights, using our people and our soldiers as surrogates in proxy wars.”

Qureshi, the foreign minister since March 2008, said Pakistan remains a vibrant, energetic country — with democratic elections and a “robust and boisterous” media — despite massive floods that put one-fifth of the country under water.

Economic aid from the United States eases the threat of terrorism. “If there were factory jobs for young people they would be less vulnerable to inducement from radicals and terrorists.” But Europe and America also must open their markets to Pakistan’s goods and services. “We need trade, not just aid,” Qureshi said.

The United States must also help to ease tension between India and Pakistan by helping to resolve disputes over the Kashmir region, he said. And, most importantly, Washington must hold off on unmanned drone attacks and helicopter assaults in Pakistan territory, which infuriate the population.

Polls now show “an overwhelming majority of Pakistanis consider America not a friend but, rather embarrassingly, the enemy. … This is the mind-set that we have to reverse,” said Qureshi. He underscored his commitment to doing just that, even though it has required him at times to stick “out my political neck.”

During the question-and-answer period, Qureshi was pressed on why Iran should not have nuclear weapons when Pakistan does. He insisted that Pakistan faced a real threat from India, whereas “I don’t see any immediate threats to Iran.”

Asked about the relationship with India, he acknowledged that tensions run high and that “we can’t wish them away. We have to address them — the sooner the better for the region.” The two countries face a common enemy in the form of radical terrorism and, despite jingoistic voices on both sides, “there is a new generation taking control on both sides,” he said.

Qureshi’s appearance was co-sponsored by the India and South Asia Program and the Future of Diplomacy Project.