To the heart of a movement 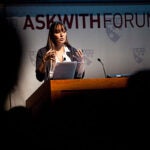 “I really wrestled in a whole new way with American history as I see it and teach it and study it,” said Jill Lepore, in a talk Wednesday night (Oct. 27) sponsored by the Charles Warren Center for Studies in American History, “and American history as it was being preached on the streets and on Fox News.”

The David Woods Kemper ’41 Professor of American History and a writer for The New Yorker, Lepore was speaking of the challenges she faced in reporting her latest book, “The Whites of Their Eyes: The Tea Party’s Revolution and the Battle over American History,” published this month to positive reviews.

The book is something of a departure for Lepore in that it deals with contemporary politics, but it is also in some ways a logical progression from her previous work, which, as Warren Center Director Nancy Cott said in her introduction, tries to bring history to a broader audience and examines “how the public is absorbing or failing to absorb” that history. Lepore began working on the book, she said, shortly after the election of Scott Brown as the state’s junior senator, which made her realize, “Wow, the tea party is really a pretty powerful political force right here in Massachusetts” — a traditionally liberal state, home of the original Tea Party, and the birthplace of the Revolution. After hearing the movement’s arguments, she added, “It led me to wonder where these people got their ideas.”

The several passages she read from the book were engaging, exhibiting humor, immediacy, and, for many in the intimate crowd in Robinson Hall’s history library, a disconcerting picture of an increasingly influential slice of 2010 America, an America that considers Fox News commentator Glenn Beck its “history professor.”

The tea party, which appeared on the scene about six weeks after Barack Obama’s inauguration — a large part of it driven and funded by what were once anti-Obama campaign organizations, Lepore said — is more disparate than some may think, representing, according to Lepore, a range of views. But many of its adherents have a few things in common. They share the “widespread belief among people in the far right that our profession [historians] consists of socialists who are indoctrinating America’s schoolchildren.” They tend to use “religion as history,” thus rendering it “incontrovertible.” They emphasize the American Revolution as an attempt to establish free markets and the Constitution as a document that enshrines the United States as a Christian nation. And they are unified in an idea that “collapses time” between past and present.

While reporting the book, Lepore said, she would often imagine the ghosts of Crispus Attucks and other figures of the American Revolution drifting by as she talked to tea partiers. She said she empathized with many of those she interviewed, and conceded that it was sometimes difficult to “think historically while being a participant-observer at a moment of American history.” And she wondered whether historians carry some responsibility for the many misperceptions that seem so rampant in the United States today.

“But scientists have done a very good job of explaining global warming,” she said during the question-and-answer session, “and these people don’t believe them, either.” She said she was gratified, on the other hand, when she spoke to a group of tea partiers, several of whom came up after her talk and said they wished they could take her classes. “Some of them don’t love Glenn Beck,” she said, “they just love history” — though many seem to have read little of it from a scholarly perspective. She also disputed the notion that the tea party rests on a foundation of racism stemming from Obama’s election as president. “The people I met were deeply wounded by the idea that they were racist,” she said. But disproportionate to non-tea partiers, she added, those in the movement believe the United States has moved beyond racism.

“The election of Barack Obama kind of rips a tear in the fabric of time,” she said. “Everything is sort of set loose.”