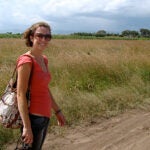 The first draft of history

Six to 8 million. That’s the estimated number of female sex workers in China alone, according to Joseph Tucker, instructor in medicine at Massachusetts General Hospital and Harvard Medical School (HMS). And that’s not taking into account male sex workers, called “money boys” in China, or similar workers in other Asian countries.

Those 8 million-plus people were the subject of last Friday’s (Oct. 1) conference called “Sex Work in Asia,” hosted by the Harvard University Asia Center and HMS. Tucker, who organized the conference, described it as a meeting of “scholars and activists, professors, public health officials, and lawyers,” tackling a “compelling social issue in an interesting part of the world.”

“We want to have an interdisciplinary dialogue,” he said.

Tucker cited unsafe sex as the second-most-common cause of morbidity and mortality in the world. In many parts of Asia, there is an increasing epidemic of sexually transmitted infections (STIs), including HIV.

The goal of the conference, Tucker said, was to “define a new bio-social research agenda for sex health [and] situate the safe-sex public health idea in Asian culture.”

The legality of sex work in Asia is murky at best. Rules exist against organizing commercial sex, but there is huge variation across regions in the methods of processing and prosecuting sex crimes.

“Much of it is how local authorities wish to be perceived,” Tucker said.

And, just like in the United States, there are large gaps in the sexual health education of Asian youth.

“It becomes highly politicized,” Tucker said. “You try to find the best compromise, but we need to think about the public health importance of teaching appropriate sexual health education.”

There are two frameworks, according to Tucker, through which governments usually try to address and protect sex workers. The first is the “empowerment approach,” the idea that women who sell sex should be respected and treated with dignity in an effort to ensure human rights. In the Sonagachi red-light district of Kolkata, India, he said, there has been a huge push in recent years to carve out a niche for effective STI prevention.

The other framework addresses sex work with a primary goal of preventing human trafficking. Most programs, according to Tucker, look at sex work from this framework, but “are not as well-developed theoretically.”

Carole Vance, associate clinical professor of sociomedical sciences at Columbia University, addressed both these issues in her talk at the conference, pointing out that although the idea of “sex work” seems straightforward, it’s anything but.

The definition of a “sexual exchange” in terms of trafficking isn’t easily identifiable, Vance said, pointing out that sexual favors in exchange for goods or services also take place within the confines of marriage.

“How do certain exchanges become ‘low’?” she asked.

Vance also addressed what she identified as the excessive research focus on trafficking and forced prostitution. In fact, she said, many prostitutes are not forced into the trade, and most prostitutes do not work in brothels.

“Therefore, who are we studying?” Vance asked.

In the end, Allan Brandt, a medical historian and dean of Harvard’s Graduate School of Arts and Sciences, said, “We must have a better understanding of the relation of culture to policy, and policy to outcome.”