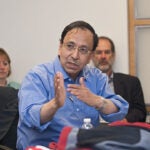 No shortcuts in Pakistan

As a young girl growing up in Pakistan, Saadia Zahidi’s greatest fear wasn’t a monster or goblin; it was a baby brother.

Even at the age of 10, Zahidi, director of constituents at the World Economic Forum and co-chair of a two-day Harvard conference, worried that if her parents had a son, her own opportunities would be severely limited.

She understood, she told a crowd at the Taubman Building, that her mother and father “would be making a very rational choice” by investing in his education instead of her own.

The favored status of men in countries around the globe and its impact on gender equity was part of a broad discussion on gender diversity at the Harvard Kennedy School (HKS) during a forum sponsored by the HKS Women and Public Policy Program.

“The importance of building this case for how in the realm of gender to do good and do well at the same time,” she said, “and to make the case for how doing the right thing morally, socially, and economically coincide, is enormously significant.”

Using data from a comprehensive study of 68 countries conducted by the World Bank, Mayra Buvinic, the bank’s senior spokesperson on gender and development issues, argued that better gender equality leads to poverty reduction.

Buvinic said that having women involved in the labor market gives them more control over household decisions, and leads directly to their children receiving better health care and educational opportunities, and becoming part of labor markets.

Sandra Lawson, senior global economist at Goldman Sachs, called the education of women and girls likely “the most critical step for economic development in the world.”

The problem is that “you need to be able to realize a return on investment to make it worthwhile,” said Lawson, who noted that governments have a role to play in making sure labor markets can absorb educated female workers, in part by easing hiring and firing restrictions and lowering tax burdens on businesses.

The private sector can also play an important role by making workplaces more friendly and open to women, and providing better training and mentoring programs. And women themselves have a key responsibility to act as role models for other women, Lawson said.

When considering countries like the United States, where many companies are eager to achieve gender parity, questions still remain about the tradeoffs women make when entering the labor market, said Ricardo Hausmann, director of the Center for International Development at HKS and professor of the practice of economic development.

Those corporations, while tracking the number of women employed within the organization, are not accurately tracking how many of those women are married or have children, he said.

“They are not terribly aware of the substitution that may be happening between a woman’s role in her professional life and other life balances,” Hausmann argued, adding that in wealthier nations the challenge of making “work compatible with marriage and motherhood” remains.

While gender equity has advanced in recent years around the globe, there is still much that needs to happen, said Laura Liswood, conference co-chair and co-founder and secretary general of the Council of Women World Leaders.

“We need to hurry history, we need to move this faster,” she said, adding, “We can’t just keep talking to ourselves — we have to spread this information
much wider.”