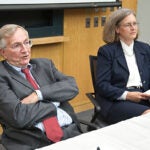 The bad news on Afghanistan

The Posse Foundation may sound like something out of the Wild West, but it’s actually a unique nonprofit that helps promising but economically disadvantaged kids to prepare for and then succeed in college, in part by strengthening ties with their college-bound peers, or “posses.” Since the organization’s founding in 1989, it has helped more than 3,000 students get into and graduate from top-tier universities.

The group’s founder, Deborah Bial, Ed.M.’96, Ed.D.’04, spoke on “The Politics of Race and Class in Higher Education” at an Askwith Forum on Tuesday (Oct. 26) to a crowd that included current Posse students, who continued the discussion during an impassioned question-and answer period.

“What is smart?” she began, showing slides of luminaries from Einstein and Al Sharpton to Mother Teresa and Marilyn Monroe.

But so many people who are smart don’t show up in the measures we use to judge academic performance, Bial said, and those people are disproportionately black, Latino, or poor. She spent much of her lecture discussing who “deserves” to get into good schools in a nation that considers itself a meritocracy in which “we have a system that allows those who deserve it to succeed and move ahead.”

With admissions systems based on grade-point average, school ranking, and test scores, not everyone is on a level playing field. The statistics are not new, but bear repeating. While fewer than 9 percent of whites live below the poverty level, about a quarter of African Americans do. The unemployment rate for whites is about half that of blacks and two-thirds that of Latinos. Though the national high school graduation rate is 71 percent, it drops to less than half that in low-income urban school districts such as Indianapolis. White students receive 72 percent of the four-year college degrees in America, though they make up only 65 percent of the population.

“Now we’re going to add standardized tests,” she said. “You know, we really can’t put enough barriers in the way.” Many top-tier schools, she said, only consider students with SAT scores of 1,200 and above, a standard that lower-income students rarely meet, despite the success many go on to have later in life. Because selective institutions recruit their executives from top-tier schools, a “good ol’ boys” network has persisted in which more than 90 percent of highly placed executives are white.

“There are initiatives under way to close the gaps,” Bial said. “But too often they define themselves by the deficiencies of the populations with which they work,” and as such, they “unintentionally creature further racial divisions.”

She gave as an example a new National Merit Scholarships program, the National Achievement Scholarship. “We still end up with two programs,” she said. “One called ‘merit,’ one not called ‘merit.’ Diversity should not be a synonym for minority.” We need to expand our definition of merit, she said.

“What do we do to ensure that people from all walks of life, from all backgrounds, get a chance to pursue the American Dream?” Bial asked. “Every segment of society has to do its part. Our politicians have to pass laws. Our entrepreneurs have to innovate. Our business leaders and foundations have to fund. Our community leaders and activists have to speak out. Our institutions of higher education have to be in the mix. . . . They have to broaden the way they see who is deserving.

“We have to fix K-12,” she concluded. “But we can’t let generations slip through the cracks while we’re waiting. These kids are out there. They’re ready. They’re hopeful. And we can’t let them down.”

The Askwith Forum was sponsored by the Harvard Graduate School of Education.