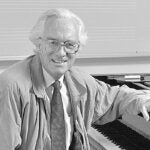 “Thank you for bringing your excellence to work every day and serving the University so long and so well,” Hausammann told the proud crowd of staff, faculty, and friends and family Wednesday (Oct. 13) at Sanders Theatre.

“I think staying at one place for 25 years is a very special kind of solidity and engagement in this world of changing and moving and transition,” said Harvard President Drew Faust, who dug into Harvard’s past 25 years to offer a history lesson of sorts.

“Today I wanted to talk to you a little about your history, and what has happened at this institution since you arrived here in 1985,” she said.

“You arrived here just as the personal computer was becoming a regular mode of doing work at this institution,” said Faust.

“I sometimes look at my email and I look at the designation ‘CC,’ for copying people, and I wonder how many of our students and our younger colleagues have any idea what CC stands for,” said Faust, drawing laughs. “This is a vestigial remnant that we are among the few people remaining on earth to still understand. And I think we have to take this knowledge into the future and make sure that people understand that there was once carbon paper.”

Other advances to revolutionize the workplace in 25 years include the Internet and mobile technology, but also “who we are, and who we work with at Harvard,” said Faust.

“This is a much more diverse community than the one you entered 25 years ago. When I looked at the Crimson from 1985, it noted the first tenuring of an African-American professor at Harvard Business School. Similarly, Harvard Divinity School tenured its first woman during your first year at Harvard.”

Faust noted that the University is not only more culturally diverse in its staff, faculty, and student bodies, but economically diverse, as well. Eighteen percent of this year’s freshman class, said Faust, “come from families with incomes $60,000 or below, which means that their families are paying no parental contribution.”

The number of international students has doubled, Faust added.

Honoree speaker Kathy A. Spiegelman, director of Harvard Capital Planning and Project Management, recalled the ways the campus has evolved over 25 years.

“The changing of recognizable physical patterns of the spaces and buildings of Harvard shaped much of how I remember the last 25 years,” said Spiegelman, who, through the six different positions she’s held has helped to advance the look of the University through work with local government.

“The next 25 years will look different from the last,” she said, “and I wouldn’t have it any other way.”

Henry Ford II Professor of Human Evolution David R. Pilbeam recalled his highs at Harvard — meeting his wife being the greatest. His tenure at Harvard also involved multiple posts, even as one-time interim dean of the Faculty of Arts and Sciences, where he approved the new General Education curriculum.

Pilbeam also remembered bumping into a former student in Harvard Yard during a class reunion. The student told Pilbeam he remembered his human evolution class well.

“He told me, ‘I remember how you walked like a chimpanzee,’” said Pilbeam.

In the audience, Jaronica Fuller, a staff assistant in the Department of Government, was cheering on co-worker Sharon Jackson, a financial administrator. “This is the second ceremony I’ve been to,” said Fuller, who recognized that she would most likely be one of the future honorees.

For a list of honorees, visit HARVie. A Harvard ID is required.