No shortcuts in Pakistan 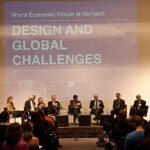 Focus on the world’s problems

Poverty is the enemy of preparedness, experts on the Pakistan floods said Thursday (Oct. 14) at Harvard’s Center for Government and International Studies.

Poverty not only forces administrators to choose between meeting immediate needs or spending resources on future catastrophes that may or may not happen, it also puts the most vulnerable people in harm’s way.

Crisis expert Herman Dutch Leonard said that when looked at from a risk management perspective, poverty forces people to choose riskier options in life, such as living in remote or dangerous areas, because they tend to be cheaper. As a consequence, millions of poor Pakistanis live near the Indus River and its tributaries, whose risk of flooding creates an alley of poverty along its banks.

Leonard spoke at a panel discussion on the Pakistan floods. The talk drew an audience of about 50 that packed the seminar room.

The event, “The Floods in Pakistan: Acute Catastrophe, Long-Term Disruption,” was sponsored by the South Asia Initiative and the Harvard Kennedy School’s (HKS) Program on Crisis Leadership. It was moderated by South Asia Initiative Director Sugata Bose, the Gardiner Professor of Oceanic History and Affairs, and included Program on Crisis Leadership Co-Director Leonard, who is also the George F. Baker Jr. Professor of Public Management at HKS and the Eliot I. Snider and Family Professor of Business Administration at Harvard Business School.

While the flooding in July and August created an acute crisis, displacing some 20 million people, flooding agricultural fields, sweeping away roads, bridges, and buildings, and killing large numbers of livestock, recovering from it will be a long-term struggle, Bose said. The acute phase of response has passed, he said, but a solid commitment is needed if rebuilding is to be effective.

Cheema, a visiting scholar at the Asia Center this year, said the poor have only weak rights to the land in Pakistan, with most of them being net buyers of food, rather than producers. Their wealth is concentrated not in the land, but in their livestock, many of which perished in the flood. Exacerbating the problem of recovery is that the social protection system is weak and few households have people engaged in diverse occupations that could provide support while agriculture recovers.

Efforts to mitigate future natural disasters tend to go through a flurry of activity immediately after a calamity but then peter out, Briscoe said. Pakistan once had an advanced water management and irrigation system, and its irrigation system is still the world’s largest, he said. But in recent decades, investment has declined, leaving it outdated and strained by demands for water and electricity.

Because of frequent droughts and electricity shortages, Pakistan’s water managers must walk a knife edge in handling storage in the nation’s few dams, Briscoe said. Rather than drawing down the water level in advance of monsoon rains to allow for flood mitigation, they must keep reservoirs nearly full to provide water both for electricity generation and as a cushion for irrigation in the dry months in case the monsoons are weak. That means during heavy monsoons like last summer’s, the reservoirs have very little capacity to stop flood waters from flowing downstream.

Briscoe said that universities like Harvard can aid recovery through research and consultation, informing future actions and guiding those rebuilding to the best choices.

The focus on recovery must not waver, Leonard said, because future events like this are not only possible, they’re likely. Each year monsoon rains come to Pakistan, but what has changed over time is the people, how they’re distributed, and how the government makes choices to manage populations and water. Crowding, not nature, has made natural disasters more deadly. In the 20th century, there were six earthquakes that killed more than 50,000 people. In the first decade of the 21st century, Leonard said, there have already been four earthquakes that deadly. The increased death toll is not because we’re seeing more earthquakes, however, but because people are living in more marginal conditions.

On the positive side, Leonard said, human populations are very resilient and, despite the cost of potential solutions, there are solutions to be had.

“[People] are hardworking, self-reliant, and don’t expect the cavalry to come riding over the hill for them,” Leonard said.