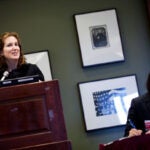 Conditions in Southeast Asia are ripe for a devastating rice shortage

Water problems and bad agricultural management are combining to set up a crisis in Southeast Asia over rice, its critically important staple food, according to authorities on the issue.

At least 2 billion people rely on rice for subsistence, with another billion and a half making it a major part of their diet, according to David Dapice, chief economist for the Rajawali Foundation Institute for Asia’s Vietnam Program, located in the Harvard Kennedy School’s Ash Center for Democratic Governance and Innovation.

As became evident during the food crisis of 2008, critical shortages aren’t necessary to create serious problems, Dapice said. If the international supply is disrupted enough so that prices soar, the poor who rely on rice for food are simply no longer able to purchase it.

Dapice said that people who spend half of their incomes on food would be devastated by tripled rice prices, as 2008 demonstrated. He said prices still haven’t returned to their pre-2008 levels. Before the jump that year, rice prices had been stable for about a decade at between $200 and $300 a ton. In 2008, prices averaged $650 but reached a high above $1,000. They’ve re-stabilized since then, but at $550 a ton.

Another issue, Dapice said, is that less rice is exported for trade than is the case with staples such as wheat. Of the 300 million tons of rice produced each year, just 10 percent is exported, which means that small changes in the export supply can have a large effect on the international price.

Water also is a major concern with rice, in several areas.

Climate change is a factor, since sea-level rise would push salt water up the river deltas, where rice cultivation is conducted. Rising temperatures can also affect yields, since rice plants are sensitive to that. In addition, stronger storms prompted by climate change could wash away plants before they can be harvested, forcing farmers to replant, and increasing the cost for poor farmers.

Misusing groundwater also affects the region’s aquifers, Dapice said. The Mekong River Delta alone has a million tube wells that suck water from the ground, a practice unregulated by government. The result is that wells are becoming exhausted, either because the groundwater becomes more saline, or because it becomes too expensive to drill deep enough to reach more water.

Groundwater is also used by fish farmers, who resupply their ponds with fresh water rather than purify existing water.

In Thailand, a major water threat comes in the form of China’s plans to build dams on some major Southeast Asian rivers. How problematic that proves, Dapice said, will depend partly on how China manages the water and how much it lets flow downstream. In addition, dams impede silt flow, robbing agricultural fields of nutrients during flooding and stopping the nourishment of river deltas. China’s dam management could affect Cambodia too, since there is a major freshwater fishery in a large lake replenished annually by the Mekong.

“I think there’s fairly good reason to be worried with respect to the world’s rice supply,” Dapice said. “There are some serious water problems we’re facing, and they can be very, very serious in Southeast Asia, depending on how the dams that are being built are managed. I think we are likely to run into food problems in the next five years.”

There are possible solutions too. Water use is very inefficient, so conservation would help. The shipping and handling of rice could be improved, since a lot is lost during transport. Consuming less meat would increase the grain supply for humans, since less of it would be fed to animals. Shifting policies away from biofuel production would allow more land to be cultivated for food crops. Though rice consumption has deep cultural roots, people also could switch to other foods if rice prices spike, as long as prices of the replacement food don’t climb.

In Myanmar particularly, there’s much room to improve rice cultivation, though Dapice and Vallely were skeptical that the current government would enact the reforms needed to foster changes. Myanmar’s military government is doing almost nothing to support local farmers, they said. Vallely scoffed at Myanmar’s inclusion on the United Nation’s list of nations that have met their Millennium Development goals for extreme hunger. The only reason Myanmar could be included on that list is if its figures were essentially fabrications, Vallely said. After talking with 2,000 farmers during a research trip there, Vallely said, “I can attest there is severe and extreme poverty in Myanmar.”

Vallely said malnutrition is widespread, even in areas with plenty of water. The researchers did upper-arm circumference tests, a measure of malnutrition, and found just 3 percent of those tested were normal.

Vallely laid much of the blame for widespread poverty on the Myanmar government, which controls the centrally planned economy. The government provides little support for farmers but requires them to plant rice even during dry spells when other crops might fare better. Myanmar has virtually no rice-exporting business, but has the potential for much more, Vallely said.

“There’s no famine here, but there’s severe malnutrition,” Vallely said. “You can have real poverty even when you have water.”