Focus on the world’s problems 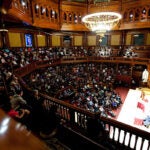 The World Economic Forum came to Harvard Thursday (Oct. 14) as part of a new effort to seek solutions to sweeping problems from the leaders of tomorrow, the University’s students.

The forum, an international nonprofit dedicated to solving the world’s weightiest problems, is best known for its annual meetings in Davos, Switzerland, which attract leaders from around the globe. Harvard President Drew Faust, who delivered welcoming remarks at the event, said that she had attended two of those meetings and that they’re akin to “being on the mountain” seeking wisdom.

“Now the mountain is here in Cambridge for the day,” Faust said.

The session, held at the Graduate School of Design, sought to bring an alternative focus to the discussion called “Design and Global Challenges.” It featured working groups where faculty members and students discussed each of six issues: trade, population growth, the international monetary system, values, global governance, and the skills and mobility of the world’s labor force. The working sessions came after topic presentations by prominent faculty members on the six key areas. Organizers included Toshiko Mori, Hubbard Professor in the Practice of Architecture.

In the closing plenary session, the groups summarized their discussions. Sky Milner, a student at the Graduate School of Design, presented results of the international monetary system analysis, which was led by Boas Professor of International Economics Richard Cooper, who is also a member of the World Economic Forum’s Global Agenda Council on the International Monetary System.

Despite the recent global economic crisis, Milner said, the group didn’t find many areas for significant changes to the current system. Rather, he said, the discussion turned to other problems, such as climate change, child welfare, war, and disease, and how the international monetary system could help. While growth is important, Milner said, it doesn’t have to conflict with other areas that most observers would agree should be global priorities.

Cooper added that an exercise presented during the discussion, originally credited to the Copenhagen Consensus, a Denmark-based think tank, helps focus the mind on what ought to be priorities. The thought experiment asks what someone would spend $50 billion on if the cash were earmarked only for uses that would benefit the next generation.

The event’s topics were selected as part of the World Economic Forum’s Global Redesign Initiative, in which 1,200 experts from around the world have been working through Global Agenda Councils to identify problems in international cooperation and create specific recommendations for actions to address them. Thursday’s sessions were intended to provide feedback on the work of the councils in the areas discussed.

Michele Petochi, the World Economic Forum’s head of university community, thanked Harvard’s organizers for the event, saying the forum partly owes its success over the last 40 years to Harvard and its faculty’s expertise. The session was planned as a pilot event that, if successful, would be replicated at other universities.