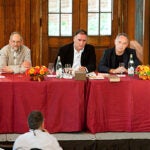 What began nearly a decade ago has turned into an annual rite of fall for Cambridge residents.

Under a brilliant blue sky on Oct. 9, Harvard hosted 700 residents for Cambridge Family Football Day. This was the largest turnout on record as Harvard’s neighbors enjoyed lunch at the stadium and later watched the Harvard Crimson beat Cornell, 31-17.

Every year Harvard invites Cambridge and Allston-Brighton residents to Community Football Days to cheer the Crimson and feast on free fare. These two events are among the many sponsored by the University, which encourages and welcomes Harvard’s neighbors to campus year-round.

“The record number of Cambridge residents who turned out to watch the Crimson game this weekend points to the strong connection between Harvard and the Cambridge community,” said Mary Power, chief of community relations and executive director of community initiatives at Harvard. “We look forward to seeing even more neighbors — young and old alike — at the Community Football Days next year.”