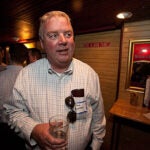 At the annual event, which is coordinated by Harvard Public Affairs and Communications, neighborhood residents met and mingled with each other and with Harvard staff members over a dinner provided by the University, before attending the evening football game.

The Allston-Brighton Tent near Harvard Stadium was filled with neighbors sitting at round tables, eating sandwiches and cookies, and drinking soda. There was plenty of laughter, and music from the visiting marching bands. Harvard staff members handed out free tickets for the game between the Crimson and Holy Cross, which Harvard won, 34-6, in its season-opener.

More than 300 residents and Harvard staffers gathered in small groups, chatting while they ate. T. McAvoy and Beth Clemente Weitz were seated with another neighbor. McAvoy said it was a great annual event for the community, and Weitz agreed. Having grown up in Allston-Brighton, she had a long-term perspective.

“When we were growing up, Harvard felt elitist, but it’s different now,” said Weitz, whose 13-year-old daughter is being mentored in math for the second year by Harvard undergraduates at the nearby Harvard Allston Education Portal. “Now it seems Harvard is trying to do more for the community. You can see it in the Ed Portal, the Farmers’ Market, the skating rink, and the mini-golf and batting cages” at the Harvard Allston Field and Fairway.

Several other families that frequent Harvard’s programs in Allston came to the pre-game event.

For Maile Takahashi, Harvard’s new director of community programs in Allston, it was just what she loves to see. “These children know each other now through the Ed Portal or the Field and Fairway, and they’re having a great time together. This is one of the things I love to see that is happening through Harvard’s programs in Allston,” she said.