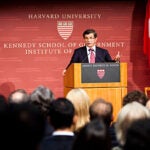 Radcliffe Fellow Erica Caple James, M.T.S. ’95, Ph.D. ’03, is a Harvard-trained medical and psychiatric anthropologist. In the mid-’90s, she was studying rehabilitation programs for post-conflict rape and torture victims in Haiti. Then another kind of research caught her eye: the dark side of charity, a human endeavor you might not think has one.

After all, said James in a lecture this week, Christians — for one — believe that charity is “a spiritual state in which one extends love, empathy, and compassion toward others without judgment.”

Charity is also both “a sentiment and an action,” and allows moral values to take on a physical expression, said James, a one-time divinity student.

But she discovered that the moral imperative of giving sometimes clashes with the mechanisms of giving, she said. When faith-based organizations become “the apparatuses of governmental security and policing,” these organizations get caught between “the poles of compassion and repression.”

James — who is on leave from the Massachusetts Institute of Technology — will use her year at the Radcliffe Institute for Advanced Study to write an ethnographic account of how faith-based social service organizations become the sometimes uncomfortable agents of state governance.

Take the United States Conference of Catholic Bishops. It is now the largest U.S. resettlement agency because of its subcontracts with the federal Office of Refugee Resettlement. Through Catholic Charities, the group runs residential refugee centers, including Miami’s “Boys Town,” which James visited in 2004.

This residential center for Haitian children — since renamed the Unaccompanied Minors Program at Monsignor Walsh Children’s Village — was an outward sign of charity for children whose parents had died and who had experienced trauma in their native country.

But Boys Town was also a self-described “soft detention” facility that James said was part of a federal system that “surveys, polices, detains, and expels” unlawful immigrants.

She described her visit to Boys Town as “deeply troubling” — and one of many experiences during her research that “provoked … moral and ethical questions about the relationship between charity, security, and disparate treatment.”

Mixing faith-based charities with government imperatives also creates another class of problems, she told her audience of 60 at the Radcliffe Gymnasium: The charities themselves may clash with the more secular aims of federal programs.

James used the example of the Haitian Multi-Service Center, a Dorchester, Mass., social service agency administered by Catholic Charities. In 2006, the center evoked canon law, banning the distribution of contraceptives and discouraging information on abortions — setting off what James called “an interplay of … institutional and personal dilemmas.”

James also fears the “potential uses” of the federally required databases that are routinely compiled in such community centers — an intrusion in places that she said offer clients rare moments of safety and refuge.

The situation is aggravated by what she called a “grant economy” that demands constant data gathering and report-writing.

Faith-based organizations will continue working with secular agencies responsible for helping vulnerable populations, said James. That’s where the money is.

Faith-based groups may simply continue their historical mandates of charity, said James, or they may one day “completely lose their compassionate spirit and become repressive.”

Their suffering is complex — “simultaneously medical, political, legal, economic, and even spiritual,” said James. Will hybrid government-faith aid groups be capable of the complex treatment needed?

And Haitians have an “unthinkable history” of slavery, repression, violence, poverty, and political unrest, she said — peaking with the “necropolitics” of the two-generation Duvalier regimes of 1957-1986. A historical irony is the result of all this suffering, said James — “negative depictions of Haiti and its natives as sources of pathology and danger.”

Can modern charities overcome this mythology?

“Whether at home or abroad,” said James, “Haiti and its citizens are uniquely, if tragically, poised to provide answers to these questions.”