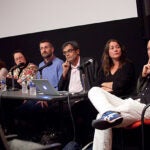 Even under the brutal reign of the Third Reich, the glow from the City of Lights never dimmed. Its cabarets and nightspots stayed open, filled with singers and entertainers. Artists, writers, and filmmakers continued to work along the banks of the Seine and beyond.

Yet the decision of many to pursue life as normal and to continue embracing the city’s cultural life was not exactly sleeping with the enemy. It was full of complicated nuance and meaning — a subtlety that is at the heart of Alan Riding’s new book, “And the Show Went On: Cultural Life in Nazi-Occupied Paris.”

Riding, the former European cultural correspondent for The New York Times, was at Harvard Monday (Oct. 25) for a panel discussion about his new work.

Homi Bhabha, the Anne F. Rothenberg Professor of the Humanities and director of the Humanities Center at Harvard, moderated the event — and started with a quote from the author: “The French public has learned that collaboration and self-preservation were stronger instincts than resistance.”

There were fascist sympathizers who collaborated openly with the Nazis and there were Communist factions that took the lead in the resistance, but many members of the cultural elite were caught somewhere in the middle, said Riding.

Some were simply opportunists, “drawn to who was powerful and who could promote their work,” he said — while others were blinded by their own vanity.

Maurice Chevalier, who sang for French prisoners of war in Germany at the very same camp where he had been a prisoner during World War I, “came to personify the collaborationists” to the United States and Britain, said Riding. “He was used to being adored and failed to pay heed to who was applauding him.”

Some entertainers later claimed they had been duped — told by German officials that French prisoners of war would be released in exchange for their visits to Germany.

But other French artists and intellectuals defied their German oppressors. Some Paris theater companies refused to allow German acting troupes to monopolize their stages, and certain writers contributed to clandestine newspapers. Some artists even used their German contacts to help others in trouble.

Still, authors such as Jean Paul Sartre, Simone de Beauvoir, and Albert Camus accepted the restrictions and censorship imposed under the Nazi occupation and continued to publish.

Was that wrong, wondered Riding? “In general,” he offered,  “the lines were blurred” — and that you have to consider that there was an ultimately shifting political dynamic.

“The occupation was not like a still photograph,” said Riding. “It was a constantly moving image in which people and artists and writers among them changed positions as the war advanced.”

For a firsthand perspective, one slightly removed from Paris, the panel turned to Stanley Hoffmann.

Hoffmann knows of what he speaks. He was a young schoolboy forced to flee from Nice to a small town in southern France in the early 1940s. He recalled losing his best friend, who was rounded up in a police raid and never seen again.

“It was infinitely complicated,” said Hoffmann, in part because there was a great deal of “evolution” from 1940 to 1944. That is: The mood and attitude of the French shifted dramatically from one year to another as people tried to “survive the best they knew how.”

“They could not predict what their attitudes would be,” he said. “We did not know what was happening in the next village … five miles away.”

The most important lesson he learned during that time, said Hoffmann, can be summed up in words from “The Plague,” by Camus: “There is in human beings more to be admired than to be despised.”

While there were “swines and traitors,” he said, there was also “a fundamental decency in many people, in many places, which was very easy to overlook because it was not spectacular.”