American banks: On the mend 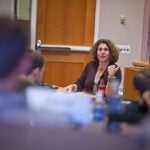 Peering into the crystal ball

You know something has changed when one year you are second on the list of the world’s most powerful women, and the next year you drop to No. 15, outranked by Lady Gaga.

To Sheila Bair, chairwoman of the Federal Deposit Insurance Corp. (FDIC), that dip in ranking sends a good message. “My influence is declining,” she said. “That’s probably a good thing,” a sign that U.S. banks are stronger, and that the eyes of the world are no longer nervously riveted on finance regulation.

Bair, who started her five-year term in 2006, made the Forbes magazine powerful-woman rankings three years in a row. In 2008, she was in the No. 2 spot, after German Chancellor Angela Merkel.

The FDIC, created in 1933, guarantees the safety of deposits in member banks. It has $45 billion in cash on hand, and a $100 billion line of credit with the U.S. Treasury.

Crisp and talking fast, Bair delivered the annual Glauber Lecture at the John F. Kennedy Jr. Forum on Wednesday (Oct. 20), a 13-minute address that she called “a high-level overview” of the strategies behind financial regulatory reform, what is being done now, and why speedy change was so needed.

The urgency, of course, was demonstrated in the size, speed, and catastrophic nature of the fiscal crash two years ago. “It’s safe to say the past couple of years have been the most significant period for U.S. economic policy since the 1930s,” said Bair, “the most serious economic setback since the Great Depression.”

In the six months following, she said, domestic U.S. steel production dropped by half, and 4 million jobs were slashed. Today, at least 15 million Americans are still out of work, and 6.3 million house mortgages have gone into foreclosure.

In the fall of 2008, a gravely wounded economic system required “unprecedented emergency measures,” said Bair, ones that demonstrated the urgency of reform.

The Dodd-Frank financial reform law adopted in July 2010 includes corrective measures that are “historic in their scope,” she said, and are now being implemented.

Bair’s briefing included an important message that even nonexperts can grasp: No bank or financial institution is too big to fail any more — and that’s good.

“In a world of ‘too big to fail,’ risk taking is subsidized by the government (and) losses are socialized,” she said. Dodd-Frank eliminates this “explicit government backstop,” said Bair. “Equity and debt holders should rightly be at risk if things go wrong.”

Large and rich firms — the ones that are “systemically important” to U.S. markets — are now required to have resolution plans, she said. These plans are what Bair called “living wills” that outline predictable closures and liquidations, “the orderly unwinding of the company should it run into problems.”

These resolution plans are critically important to financial reform, not “simply paper exercises” but “actionable documents.”

The financial crisis of 2008 revealed deep flaws in the system, said Bair. “Business as usual was not an option.”

She predicted that Americans will “soon see a financial system where market discipline is restored; the costs of risk taking are borne by shareholders and creditors and not by the public; consumers are better protected; and regulators are much more attuned to the types of system risk that led to this crisis.”

Even before 2008, banks were already heavily regulated, said Bair. But a problematic “shadow banking” system had sprung up.

The key to reform is the system of resolution plans that will ease and slow the dissolution of a troubled company. There are three other important factors in recent reforms, said Bair:

“We all know there are new risks on the horizon,” she said, including the unknown impact of interest rates when they finally start to rise from historic lows.

The promise of these reforms is “an era of greater stability and efficiency in our financial system.”

During a question-and-answer period, Bair tackled complex questions on international leverage ratios, principal write-downs on mortgages, centralized financial systems, and even advice for those starting out in the financial world. “You need to take the risk,” she said of critical decision making. “At some point, you need to take a deep gulp and move ahead.”

Bair, a one time law and business professor who has spent most of her career in government, also rang a chime for choosing public service over Wall Street. “It’s a very good feeling,” she said, “to do something tangible and meaningful for the public.”

As for making big money, said Bair, it’s “all well and good — if you’ve earned it.”