Tracing the roots of political thought 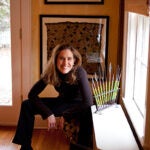 A higher profile for African studies

Eric Matthew Nelson is a young, newly minted professor of government at Harvard, though his specialty is the long, complex history of political thought.

Now he is an accomplished scholar of early modern political thought, a student of the venerable — and sometimes ancient — ideas that underlie present conceptions of liberty, justice, and property.

His fascination with history and politics “goes way, way back,” said the native New Yorker, starting at age 4, when he first saw the film “The Ten Commandments.” The 1956 biblical epic, said Nelson, inspired him to give chatty tours of the Egyptian Wing of the Metropolitan Museum of Art to his amused family.

A childhood trip to Washington, D.C., prompted an interest in American history and the law, and by fifth grade Nelson had won a spot on the student senate at The Town School in Manhattan. He dreamed of a career in the law (both parents are lawyers), and maybe political office, perhaps leading to a judgeship.

“I gave up the ghost very late,” said Nelson of his aspirations to a legal career. He set off to Cambridge, England, on a British Marshall Scholarship, clinging to that same dream, which lasted through his doctoral work.

But by then, other early influences tugged Nelson toward scholarship, including a dramatic family heritage. One great-grandfather fled Russia in 1905, a time of enforced conscription and pogroms against Jews. His maternal grandparents are Holocaust survivors who were wrested from school by the Nazis. They are “both brilliant people,” he said, “who had very little formal education.”

The drama of family history extended to his mother. Now a law professor at John Jay College, she was born in a displaced-persons camp in postwar Germany.

Then there was Harvard. “I had such an incredible experience in college,” said Nelson. “People either do or they don’t get lucky in their teachers, and I was extremely lucky.”

Nelson was a few days into his sophomore year when he met Tuck, a University of Cambridge scholar who was so new to Harvard himself that he was just unpacking his books. Nelson, 19, joined a graduate seminar taught by Tuck on philosopher Thomas Hobbes. The young scholars in that class would go on to join faculties at Oxford, Yale, Princeton, and the University of Chicago; another recently became one of Britain’s first black Tory members of Parliament.

To the teenage Nelson, Hobbes was a real draw, the star who sparked a fascination that began with a freshman-year course on Western intellectual history that was taught by Hankins.

Describing the 17th century author of “Leviathan” as “incredibly cool,” Nelson embraced Hobbes as an intellectual touchstone, and still does. He edited the first modern edition of Hobbes’ little-known translation of Homer, released in 2008 by Clarendon Press. (Nelson reads Greek, Latin, and German, and he both reads and speaks Hebrew, Italian, and French.)

“Here is someone,” Nelson said of Hobbes, “who reasons from very egalitarian premises to extremely autocratic conclusions,” a person who nonetheless was widely admired among republicans of his day.

The emerging, shifting, tumultuous history of republicanism informs much of Nelson’s scholarship. He is the author of “The Greek Tradition in Republican Thought” (Cambridge University Press, 2004) and “The Hebrew Republic: Jewish Sources and the Transformation of European Political Thought” (Harvard/Belknap, 2010). He is working on a project concerning the political thinking behind America’s founding.

Americans now accept that all humans have rights, can own property, and are free to affect their own governance. But these were all once controversial ideas, said Nelson, and it is the historian’s role to lead students back to the origins of political commitments that are taken for granted today.

Students are shocked that “fixed points in our moral imagination” — such as opposition to slavery — were once not widely accepted, said Nelson. Exposing the roots of political thought, he said, is like “playing with live ammo. We’re talking about our most important commitments, and we’re scrutinizing them.”

Concepts related to the republican ideal — justice, virtue, freedom, happiness, property — have immense power, said Nelson. “An incredible proportion of countries in the world are now called republics — even countries that aren’t,” such as Iran and North Korea.

“Being a ‘republic’ is now the price of admission,” he said, to the modern political stage. “To achieve full legitimacy, you must be a republic, and that’s an extraordinary transformation of the political world.”

Another extraordinary transformation is that monarchy is no longer “the default setting of the human race,” said Nelson. “Now if you have a monarch, it’s very important to show the monarch doesn’t actually do anything.”