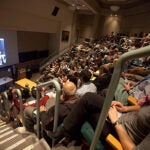 The value of women

Cooperation and inclusiveness were the main messages Ahmet Davutoglu, minister of foreign affairs of the Republic of Turkey, delivered Tuesday night (Sept. 28) at a packed Harvard Kennedy School forum.

Davutoglu, who holds a doctorate in political science, spoke as part of the Kokkalis Program on Southeastern and East-Central Europe. He has been credited with helping to transform his country into a major player on the international stage and an increasingly important bridge between East and West.

He began by recalling Francis Fukuyama’s famous prediction that the end of the Cold War was “the end of history.”

“History will find its own way,” said Davutoglu, adding that the Cold War was an aberration and that we are now entering a period of the “normalization of history” — and the first time the world is experiencing globalization, while still contending with strong regional forces. “Each of us, we are representing humanity here,” he said, “not individual nationalities.”

He outlined the six principles he declared in 2004 as critical to the future of Turkey.

First, he said, there must be a balance between security and freedom.

Second, the country must seek to have “zero problems with our neighbors.”

“I know it is impossible to have zero problems, even with brothers and sisters,” he conceded. But positing the concept will help to alter the vision of Turkey that most of its people grew up with. “In school I was told we have the sea on three sides and enemies on four sides,” he said. “Psychologically healthy people … cannot function” believing that everyone is the enemy.

Third, Turkey has lifted its borders and is now allowing free movement of its citizens — along with those of its neighbors — back and forth between countries. “It’s [the] best way to peace,” said Davutoglu.

Fourth, “we cannot identify Turkey with one geographical region,” he said. Whatever happens in neighboring countries affects Turkey, not only geopolitically but domestically as well, since it has become a nation of immigrants. “We need to use our soft power,” he said, “because it’s directly related to our domestic interest.”

Fifth, the country seeks to develop strategic alliances with the United States, Europe, and Russia, and become more active in international organizations.

Finally, he said, in the future Turkey will “be [a] dynamic force in trans-Atlantic alliance,” rather than just a “passive follower.”

During the question-and-answer period, Davutoglu fielded a query about how domestic public opinion shapes his views of foreign policy: “This is the result of democracy,” he said. “We have to accept sometimes positive, sometimes negative public opinion.” He also answered how his country is dealing with Armenia, with which it has traditionally had strained relations: He proposed a “new Caucasia based on mutual respect, integrity, and coexistence,” and vowed that Turkey is “ready to discuss” and listen. The two nations started a negotiation process in Switzerland in 2007, he said, adding that “Armenian-Turkish ties are settled in the world, in Boston, California, Paris, and elsewhere where Armenians and Turks live side by side.”

Davutoglu’s most impassioned moments of the evening came when he was asked about Israeli-Palestinian relations. “We can work with anybody if that party is willing to accept a vision of peace,” he said. “Palestinians have suffered enough. Today in Gaza 1.5 million people are living in an open prison. People are living in a concentrated manner and you are attacking from the air. This is not acceptable. We need solidarity of the international community. … If we think some countries have more rights than others, then it is difficult to achieve peace.”