The value of women 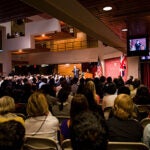 If slavery and totalitarianism were the great moral issues of the 19th and 20th centuries, then the worldwide oppression of women and girls will be the defining issue of the 21st, said Nicholas D. Kristof, Pulitzer Prize-winning columnist for The New York Times, in a talk Monday (Sept. 27) at Harvard Medical School’s Carl Walter Amphitheater.

Ending that oppression is an issue not only of justice but also of economic progress, Kristof said. Educating girls and empowering women to enter the labor market or run businesses — even on a small scale — makes a huge difference in a community’s economy. Empowered women may help lower poverty rates and diminish support for terrorism, he said.

Kristof’s talk, “Half the Sky: A Journalist Reports on Women Around the World,” combined two lecture series: the Lawrence Lader Lectureship on Family Planning and Reproductive Rights and the George W. Gay Lecture, the oldest endowed lectureship at the Medical School.

Kristof’s most recent book, co-written with his wife, Sheryl WuDunn, is “Half the Sky: Turning Oppression into Opportunity for Women Worldwide.” It was published last September by Knopf, but the first spark came in 1990, when Kristof wrote about a girl living in rural China who was forced to drop out of school because her parents lacked the $13 it would cost to keep her there. The column led to donations from readers, including what Kristof thought was a $10,000 gift. Turns out, he told the audience, that the bank had mistakenly added zeroes to a $100 donation but, with some persuasion, agreed to pay the $10,000, which funded a scholarship program for girls in the remote Chinese village.

Returning years later, Kristof found that the money for the girls’ education had made a significant difference.

“This community really was transformed far beyond the neighboring communities. It is precisely the example of the kind of virtuous cycle … when you bring girls into education and watch what happens,” he said.

Kristof asked his audience if there were more men or more women in the world. Most thought there were more women (as in the United States and Europe), but he said that worldwide the male population is greater, mostly likely due to male favoritism in food, medical care, education, and other resources.

“In an equitable world, there would be more females,” he said. “In any 10-year period, more girls are discriminated against to death than all of the people who died in all the genocides of the 20th century.”

Many in the audience — by a show of hands — had experience traveling and working internationally. Kristof urged them to be aware that they may have to “market” humanitarian aid to draw attention to issues and to create “effective storytelling.”

Kristof illustrated this point by sharing stories about girls and women he has met: a 14-year-old Ethiopian girl who suffered horrendous injuries giving birth and was left to die. The girl fended off hyenas through the night, managed to crawl to a missionary’s home 30 miles away, and received medical treatment. She recovered and later became a nurse.

He talked about two young Cambodian girls he bought from a brothel in an attempt to help them find a better life. “What struck me the most: When I bought them I got receipts,” he said. “When you get a receipt for buying someone in the 21st century, that is something to shame us all.”

And there was the Indian woman whose husband beat her daily but who managed to start her own embroidery business with a $65 loan. Eventually she hired other people in the village—including her husband. The beatings ended.

Kristof said,  “There is the misperception sometimes [that] the problem is men. It’s really much more complicated than that.”

Men eventually realize that opportunities for women open doors for everyone, he said. But women need education and income opportunities.

“Women aren’t valued in a society when they don’t bring commercial value to the table; when women bring income to the family, they are valued more in a broader sense,” he said.