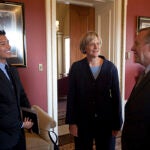 The old Peace Corps tagline “the toughest job you will ever love” would be an apt slogan for three former White House press aides who spoke at Harvard Wednesday night (Sept. 15) about the rollercoaster rides of their former careers.

“It was only tough on days that ended in ‘y,’ ” said Ari Fleischer, White House press secretary from 2001 to 2003 under President George W. Bush.

He called his old job “the most wonderful, intellectually stimulating, best job that I could ever hold, and exactly at the same time the most punishing, grinding, most pressure-cooked job I could ever hold. And that’s why I loved it.”

Fleischer was joined by Dee Dee Myers, press secretary to President Bill Clinton during his first term, and Camille Johnston, who recently stepped down as special assistant to President Barack Obama and director of communications for Michelle Obama.

The three reprised their roles as media go-betweens during a panel discussion at the John F. Kennedy Jr. Forum, taking questions from the crowd and from David Gergen, professor of public service and director of the Center for Public Leadership at Harvard Kennedy School (HKS), and himself a longtime White House aide.

Anticipating press questions and preparing responses thoroughly in advance was one key to a successful communications strategy, said Myers, particularly when dealing with presidential conferences.

“You work through an answer that sounds responsive, but maybe isn’t,” she said. “Everything you say has to be true, but you don’t have to say everything you know.”

Myers, who served as press secretary for the first two years of the Clinton presidency, was the first woman and one of the youngest in the post. She is considered the inspiration for the fast-talking spokesperson C.J. Cregg portrayed by actress Allison Janney in the television series “The West Wing.” Myers was a consultant to the show.

Myers said the White House post involved the delicate balancing act of answering questions so as to not “paint the president into a corner,” or make it appear he was “changing his position.”

“You do live in that tension,” she said.

According to one panelist, sometimes no answer is the best option.

“There are reasons, sometimes good reasons, that serve the country’s interest, not to answer questions,” said Fleischer, who admitted to not answering reporters’ questions in the wake of the 9/11 terrorist attacks that could have affected intelligence gathering or national security. But, he added, “You have to try to give an explanation for why [you won’t answer].”

In their line of work, honesty, which is a key to their credibility, can also prove dangerous. Fleischer recalled the case of current Obama spokesman Robert Gibbs, who was recently chastised by members of his own party for acknowledging Republicans could regain control of Congress in the upcoming elections.

“He caused so much pain for his team by giving an honest answer,” said Fleischer, adding, “When you are at the White House, you reach a point when you say to yourself: ‘My job is to duck and dodge.’ ”

Johnston said her best experience involved tackling a taboo topic when she worked for a time as communications director for Tipper Gore, wife of Vice President Al Gore, who admitted she was suffering from depression just prior to her husband’s run for the presidency.

“It was truly one of the most rewarding experiences of my professional career. … The way that it was handled and treated, to have gone so well for her, and so well for the country,” said Johnston.

The panelists addressed the pressures inherent in the job, the importance of developing good relationships, the frustration of not always knowing all the facts, as was the case for Myers in the Whitewater probe — a real estate controversy involving Bill and Hillary Clinton — and the changes wrought by computers that now provide instant access to information.

Technology has made the press secretary’s job much more complicated. When she worked in the White House, the preferred method of communication was a phone page that said, “call me.” The news cycle generally ended when the workday did.

Today, Myers said, there is no news cycle, because bloggers at home in their pajamas can “kidnap it” with an online post. “That was simply not true 15 years ago.”