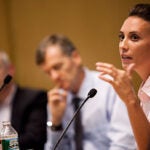 The oozing fog of war

The rapid growth of technology offers government problem-solvers a new dimension, allowing them to move beyond the traditional tools of growing budgets and proliferating laws to find direct, action-oriented solutions, according to the White House’s chief technology officer.

Aneesh Chopra, a 1997 graduate of the Kennedy School of Government who is President Obama’s chief technology officer, spoke Thursday (Sept. 23) as part of a two-day Harvard Kennedy School (HKS) conference on the importance of technology in governance. HKS officials brought together the speakers to help create a Technology and Governance Initiative.

Venkatesh Narayanamurti, the former dean of the School of Engineering and Applied Sciences who sits on the organizing committee, said that even when he was dean he thought that teaching and training in technology shouldn’t be limited to the engineering school because such skills can help in many other fields. This initiative, he said, will be organized over the next few years and is intended to have a University-wide effect. It will have strong internal connections to similar efforts, such as the Law School’s Berkman Center for the Internet and Society.

The conference brought together figures from academia, government, industry, and the nonprofit sector to discuss how HKS can best educate its students to prepare them for the future. Several speakers, including current and former HKS students, said that simply adding technology classes will not help enough. Information technology resources, coupled with a culture that fosters an entrepreneurial spirit, are critical in encouraging students to think outside the box in applying information technology to everyday problems.

Such thinking may be particularly important in the coming decade, Chopra said, since government resources probably will be limited. Officials seeking to solve real-world problems will be best off if they look to technology first for solutions, since those may be cheaper and require less political wrangling than traditional programmatic ones.

Chopra said that technology-enabled solutions stem from action-oriented rather than program-focused thinking. If emergency 911 phone service goes down during a natural disaster, for example, it can take weeks to get it restored. If officials are program-focused, they’ll center their efforts on getting 911 restored, leaving people without emergency communications during repairs. Action-oriented thinking, however, would recognize that what’s important is emergency communication, not necessarily the 911 service. Other telecommunications technologies, such as text messaging, may not be down and would be available to bridge the gap, as happened during last January’s devastating earthquake in Haiti.

Chopra cited an example from his earlier role as chief technology officer in Virginia. A small, rural town had a high rate of premature, high-risk births. The town had a clinic, but mothers routinely had to travel an hour to a University of Virginia hospital for more-skilled treatment. Rather than instituting a new program, which would require legislation, budget battles, and perhaps lengthy delays, Chopra used technology to connect health care professionals at the university with those at the clinic. With little delay and at a fraction of the cost of a new program, the rate of premature, high-risk births declined rapidly, he said.