Sit down, stay a while 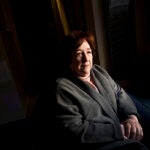 ‘Chairs — the Musical’ part of effort to promote gathering spaces

Call it ambush art, sort of.

A seemingly spontaneous ensemble swirled, serenaded, stood on, and sat in the objects of their desire outside Dudley House on Tuesday (Sept 7) afternoon as a bemused group of onlookers occasionally joined in.

But the love fest for the colorful plastic furniture was a planned performance of “Chairs — the Musical,” designed to promote the social space.

The production was the first in what has become a fall happening in connection with the Common Spaces Chairs Project, an initiative launched last year to promote gathering spaces around the campus with the addition of tables and chairs, food, and live performances.

Members of the Harvard-Radcliffe Dramatic Club (HRDC), the a.r.t. Instigators, and the Freshman Arts Program, not to mention a member of the Harvard faculty, took part in the first performance in the ongoing fall performance festival titled “The Chairs Revue.”

In the brief skit a nonbelieving student questioned the importance of the chairs, while others sang their praises, literally, at one point encouraging the audience to sing along.

“One chair for my behind, find, one chair,” sang a plaintive Harvard Divinity School professor, David Lamberth, to a light green seat using a tune from the Broadway hit musical “Rent.”

“It was fun, the people working with it were great,” said Lamberth of the chance to be involved in the show. But the professor of philosophy and theology also sang from the heart, admitting that he truly does love the new chairs and the atmosphere they inspire.

“It’s really super. I think it’s added an interesting dimension to the way the Yard feels and the way people relax and use spaces differently.”

During September and October, members of the Harvard community can enjoy the regular performances every Tuesday and Friday from 12:30 to 1:30 p.m. either in the area in front of Dudley House or in front of the Science Center. Upcoming presentations include an outtake from the American Repertory Theater’s (A.R.T.) production of “Alice vs. Wonderland,” a “psychedelic update” of the classic tale, as well as interactive and modern dance performances.

“I’ve never done a show like this,” said senior Lester Kim, a physics concentrator from Eliot House who has been in a number of HRDC productions during his time at Harvard. “You get the audience within the stage.”

Formed in spring 2008, the Committee on Common Spaces worked closely with the University Planning Office to enhance the ways the Harvard community can experience the Cambridge campus. A series of surveys, focus groups, and interviews revealed a desire for better areas on campus for informal gatherings, places where Harvard students, faculty, and staff could unite to share both the environment and experiences.

The performances encourage people to use the Yard in a different way, said Allegra Libonati, artistic associate at the A.R.T. who helped develop the “Chairs” production.

“It’s about sharing, and communing, and sharing ideas.”