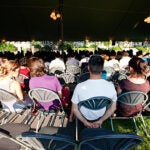 New meaning in the familiar

A new book co-edited by a Harvard researcher pulls together a wide range of research on the successes and limitations of the College Board’s Advanced Placement (AP) program.

The studies, said Philip Sadler, the F.W. Wright Senior Lecturer in Astronomy at Harvard, fall far short of consensus on many areas.

“AP classes give a lot to the top students, but pouring money into the program and trying to give every student an AP education is not efficient or effective,” says Sadler.

As the AP program becomes increasingly widespread in America’s public high schools, the student demographics that it serves have shifted and rapidly expanded. More than 25 percent of public high school seniors graduating last May took at least one AP test.

The elite students the program once catered to have been joined by hundreds of thousands of students who may be less prepared for the rigors of AP course work. That means that the number of test-takers who do poorly on AP exams is growing, and some critics have begun to question the effectiveness of the program.

Now, in “AP: A Critical Examination of the Advanced Placement Program” (Harvard Education Press, 2010), researchers present the most comprehensive picture yet of who really benefits from the millions spent each year on AP programs across the country.

Most of the studies presented in the book focus on AP mathematics and science courses. Sadler is quick to point out the difficulties of conducting research on the program.

“We can’t run control groups in ‘placebo’ classes,” he said. “Even with the best statistical tools, there is a large gray area.”

Even so, Sadler and his fellow researchers agree that the AP program has expanded to reach the point of diminishing returns. As more students are pushed to take the courses, the number of students enrolled in them without sufficient foundational knowledge increases. Unprepared students do not gain more from an AP course than they would from a standard course, and schools promoting the program often end up funding the unnecessary failure of students who are pushed to take courses for which they are not ready.

Sadler stresses that the effectiveness of paying to bring the AP to new districts must be analyzed school by school. One study in the book looks at Philadelphia, where the city has spent millions of dollars bringing the program to all of its public schools. The students passing AP tests, while low-income, overwhelmingly attend schools that use selective admissions. Students of similar income who attend the city’s regional high schools have a failure rate of at least 41 percent.

“We found that AP courses can give strong students excellent preparation for college courses, especially if they earn a 5 on the AP exam,” Sadler says. “However, AP course work does not magically bestow advantages on underprepared students who might be better served by a course not aimed at garnering college credit.”