New meaning in the familiar 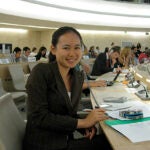 At Divinity School convocation, speaker urges listeners to upend their own expectations

In his HDS convocation address on Tuesday (Aug. 31), Machinist recalled hearing Burton’s accelerated take on Hamlet’s “To be or not to be” soliloquy, one of William Shakespeare’s most recognized monologues, typically delivered with slow solemnity.

Using a rapid-fire approach during a performance in Boston in 1964, Burton tried to get the audience to “hear it afresh, as part of the larger play of Hamlet, as an important moment in the play’s traumatic trajectory,” said Machinist, referencing Burton’s own comments to a Boston critic.

The evocative Welsh actor employed the artistic technique known as “defamiliarization,” a method of helping people perceive things in uncommon or strange ways to enhance their understanding of the familiar.

For Machinist, Hancock Professor of Hebrew and Other Oriental Languages, the strategy worked. The tactic jolted his staid conceptions of the speech and forced him to “hear it as something live and breathing, as I had not heard or read it before.”

Applying Burton’s technique to his own Bible reading, Machinist said during his address on “An 11th Commandment: Thou Shalt Defamiliarize,” has expanded his viewpoints and interpretations of the ancient religious text. He encouraged his listeners to employ the concept in their teaching and learning, as well as their day-to-day lives.

Using defamiliarization to explore the Bible, a work produced in a culture far removed in time, complexity, and perspective from today, helps to “make that text speak,” said Machinist.

Referencing the biblical story of the burning bush that delivers Moses a message in the voice of God, Machinist said many scholars contend that the deity’s ability to pervade and invade anything or anyone was simply a function of the thinking and writing of ancient times.

We assert, he said, “that if it ever happened then, for most of us …  it doesn’t happen now, or we assert it never really happened as described in the first place. Rather, the Bible has distorted, in its primitive, rationally unsophisticated fashion, what was really going on.”

But a merely straightforward reading of the text, said Machinist, shows how the writer “marks this colloquy as something very special,” and the encounter reveals an ????attempt to get in touch with something beyond, whatever that beyond might be.”

“Defamiliarization, then, in this particular instance might be,” he said, “strangely, to read the text just as it appears.”

Faculty members were stoic in their long academic robes despite the sweltering heat. For the first time, the convocation was held under the tent on the HDS green, the open space behind Andover Hall that has been transformed from a parking lot into a commons. The event included music from HDS faculty and students and remarks from HDS Dean William Graham.

Brandon Crowley, a third-year master of divinity student and a pastor at Myrtle Baptist Church in Newton, Mass., said Machinist’s words would help him with his weekly sermons, making him truly “question what I view as familiar.”