In Pakistan, controlling water is key 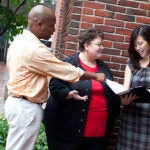 A new program to shake up education

Modernized infrastructure may be best response to episodic floods

Pakistan is a nation built around a single river, the 1,800-mile Indus. So pivotal is it to the nation’s fortunes — providing water for drinking, agriculture, and power — that taming it may be necessary to soften its sometimes-deadly moods, according to water engineer John Briscoe.

Managing the river’s floods and the region’s frequent droughts will require modern institutions and adequate infrastructure, Briscoe said. Erecting new dams may also be a central part of the long-term solution.

“Is building dams the answer alone? No,” said Briscoe, who heads the new Harvard Water Initiative at the School of Engineering and Applied Sciences and has worked on water issues in Pakistan for decades. “Is there any answer in Pakistan without building more dams? No.”

Briscoe and colleagues at Harvard and the Massachusetts Institute of Technology (MIT) are partnering with Pakistani universities, governments there and here, nongovernmental organizations, and private entities there.

Harvard’s involvement with Pakistan will be different from the crisis earlier this year in Haiti, when an earthquake killed hundreds of thousands, according to Michael VanRooyen, director of the Harvard Humanitarian Initiative (HHI) and an associate professor at Harvard Medical School and the Harvard School of Public Health (HSPH). In Haiti’s case, he said, the surgical and medical expertise of Harvard’s hospitals was desperately needed. In the case of Pakistan, while the disaster is also of enormous magnitude, the relief effort is less of an acute medical crisis and more about getting aid to people over a large area.

Even so, VanRooyen said, many Harvard faculty members will be involved in relief efforts through major nongovernmental organizations, such as the International Rescue Committee (IRC), on whose board VanRooyen sits. In addition, HHI, a cross-School initiative that aims to improve humanitarian response through research, will provide support to partner organizations, such as Red Cross and Oxfam.

As a core concern, it’s hard to overstate the extent to which Pakistan depends on the Indus River, Briscoe said. With its arid climate, Pakistan is dependent on the river and its tributaries to supply the world’s largest irrigation network, which covers an area 10 times larger than Massachusetts.

Though dam construction has fallen out of favor in wealthy nations in recent years, Briscoe said dams do more than just generate power, which some critics insist can be replaced by other sources that don’t change a river valley’s environment. Dams also store water for use during dry months and buffer the effects of flooding rains.

Major rivers in arid parts of developed nations have the capacity to store enough water to manage during both wet and dry times, Briscoe said. In the United States, for example, dams on the once-wild Colorado River can store 1,000 days of the river’s average flow. The dams in Pakistan’s Indus system, however, can store just 30 days’ worth. The numbers are similarly stark for generating hydroelectric power, Briscoe said. The United States exploits 80 percent of its hydroelectric potential, while Pakistan uses just 10 percent.

Before the recent flooding, one of Pakistan’s greatest worries was a chronic shortage of power and a constant threat of drought. That means that Pakistani water managers — who must store enough to provide irrigation downstream long after the rains end — have had to bring reservoirs to near capacity early in the monsoon season, in case the rains end prematurely. That reality, Briscoe said, provides little room for error in especially rainy seasons.

“There is essentially no protection from the vagaries of variations in river flows,” Briscoe said. “When a big event like this comes — or when there is drought — there is no physical buffer between the Indus and people.”

July and August’s heavy monsoon rains illustrated how deadly the Indus can be. Briscoe described the disaster as “Katrina times 100” in a nation with 1/100th the resources of the United States.

The rains sent floodwaters raging down the river, killing more than 1,600 and destroying more than a million homes, along with bridges, roads, power lines, and health clinics. The flooding, called the worst in a century there, is not just a short-term calamity, analysts say. It destroyed so much vital infrastructure that recovery will take years.

In the Swat Valley, for example, all 59 bridges were swept away, hampering not just immediate relief efforts, but also the eventual resumption of commerce. Floodwaters, beginning to recede in some parts of the country, still stretch miles from the river in others, spreading the destruction far beyond its usual banks.

Harvard’s South Asia Initiative (SAI) is collaborating with a Pakistani university, according to Sugata Bose, Gardiner Professor of History and the South Asia Initiative director. Bose spoke with the dean of the Lahore University of Management Sciences to work out a coordinated response to the tragedy. Faculty and graduate students affiliated with the initiative will cooperate with Lahore on rebuilding-related priorities. In addition, Bose said, SAI is supporting a visiting scholar, Ali Cheema, a Pakistani development economist.

“I visited Pakistan last May, and am in touch with friends and colleagues at the Lahore University of Management Sciences to monitor the situation,” Bose said. “We are convening a meeting next week of faculty at Harvard and Tufts knowledgeable about Pakistan to discuss a coordinated response. We recognize that even though the floods are the immediate threat, drought may be the challenge next year.”

Richard Cash, senior lecturer on international health at the HSPH, worked for years in nearby Bangladesh, which floods frequently because of cyclones slamming ashore. Cash expects Pakistan to be a slowly evolving disaster, more akin to still-recovering New Orleans after Katrina than the immediate large loss of life from the Indian Ocean tsunami or the Haitian quake.

Cash said experience in Bangladesh indicates that it is best for people to return home from relief camps as soon as possible. Though distribution of aid supplies is problematic outside camps, their crowded conditions not only allow disease to spread, they also affect residents in other ways.

“What is absolutely critical is to get people … involved in their own rehabilitation rather than sitting and waiting, which is horribly debilitating,” said Cash, who in the 1960s conducted pioneering studies on using oral rehydration to fight diarrheal diseases, which often spread in floods. “My guess is that the people will go back as quickly as they can to try to rebuild whatever is left.”

Leaning agreed that those displaced will return home relatively quickly — farmers don’t stay away from their fields if they can find a way back. Such resettlement, however, presents an enormous challenge in restoring critical infrastructure, providing health care, and attending to psychological loss.

Briscoe, who has talked with Pakistani officials, agreed that the nation’s recovery will be long. Even before the flooding, discussions were well advanced for a Harvard program involving University faculty who would work with the government, the private sector, and Pakistani colleges on critical national water issues. These range from understanding the effects of climate change on the Himalayan mountains and the Indus to improving multinational water cooperation to improving productivity and security.

“We and colleagues at MIT envision working with Pakistan on management issues to get greater productivity and reduce insecurity with respect to water,” Briscoe said. “In the medium term, both we and our Pakistani partner think there’s a lot we can do to help them.”