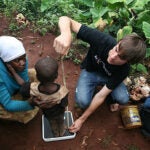 Don’t recharge your iPhone or BlackBerry next to your bed. Keep a little soulful distance with those ever-beckoning electronic devices.

That was the most important piece of advice that new-media magnate Arianna Huffington offered a morning crowd at the Harvard Kennedy School (HKS) Tuesday (Sept. 14).

“We are hyperconnected, and we are paying the price,” said Huffington, who admitted to charging electronic devices as far away from where she sleeps as possible to avoid the temptation to check them throughout the night.

The words seemed strange coming from a woman who caters to online audiences driven by a primal need for up-to-the-minute information. But when asked what the future’s next great platform would be, the founder of the popular website The Huffington Post, which boasts 45 million unique visitors a month, answered, “disconnecting.”

“Disconnecting in order to reconnect with ourselves is going to be a bigger and bigger trend,” she said, quickly adding, “But don’t forget to check out The Huffington Post.”

The author and syndicated columnist was at Harvard to discuss her work and her new book, “Third World America: How Our Politicians Are Abandoning the Middle Class and Betraying the American Dream.” The discussion was sponsored by the Kennedy School’s Joan Shorenstein Center on the Press, Politics and Public Policy.

Launched in 2005, The Huffington Post is a news website and collective blog featuring commentary and postings, as well as news from a variety of media outlets. Huffington said she founded the site with the aim of earning readers’ trust, developing a place for civil discourse, and offering news 24/7.

“My dream from the beginning was to combine the best of the old — traditional journalism, fact checking, aggressive fairness,” she said, “with the best of the new — immediacy, transparency, and engagement.”

In discussing “Third World America,” Tom Patterson, moderator and Bradlee Professor of Government and the Press, asked Huffington about her suggestions for “revitalizing America’s middle class.”

“We as individuals and as members of our communities need to be engaged in the solutions,” she said, adding, “It’s the only ultimate solution to the major crisis we are going through.”

Huffington said that the crisis, including dismal unemployment rates, a rise in poverty, and a drop in the nation’s GDP, is much worse than the Obama administration has acknowledged, noting that she picked the title of her book in an effort to “sound the alarm.”

The media also have a role to play in putting a human face to the problems plaguing the nation, said Huffington.

“The media have really failed us in terms of telling stories to capture the public imagination beyond the numbers.”

But while disconnecting may be the wave of the future, online communities power Huffington’s road map to significant social change.

“The Internet and social media are exploding” with ideas and ways to make change, she said, referencing websites like donorschoose.org, which allows people to donate directly to public school projects.

“People all around can immediately take action,” said Huffington, adding that if the media can put the spotlight on what is being done there’s the opportunity to “really make a big difference.”