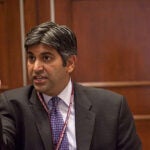 In his first major address since departing as Britain’s prime minister in May, Gordon Brown used a Harvard lecture Thursday night (Sept. 23) to call for “a fundamental shift in the way the world works.”

Delivering the annual Malcolm Wiener Lecture in International Political Economy at the Harvard Kennedy School (HKS), the one-time university academic and chancellor of the exchequer offered a prescription for a still-reeling world economy, which he called “the first crisis of the global age.”

Brown, an authority on international economics who spent the week at Harvard’s Institute of Politics as the Heffernan Visiting Fellow, called for more fiscal coordination — specifically a global financial institution with its own constitution.

That constitution, he said, would require the financial sectors around the world to be transparent, to have sufficient capital and liquidity, and to be overseen by a coordinated system of international regulation.

“Choices have to be made,” Brown told a capacity audience at the session, a Harvard venue for high-level public discussions for 30 years. He acknowledged that many nations would find such broad coordination difficult and that some critics would say it is “to dream something that is impossible.”

But the world is beset by problems that demand global, coordinated solutions, said Brown, who offered two examples beyond the economy: climate change and international terrorism.

For 200 years, he said, Europe and the United States made and consumed most of the world’s goods and were the primary engines of global trade. But no more, he said. Manufacturing has tipped toward Asia, where any financial decisions now take into account investment and demand.

There is a sunny side to the power shift in the global economy, he said, in the form of an Asia and South Asia that are creating their own consumers — an engine of economic demand that will give new life to sagging Western fortunes. “A billion people,” Brown predicted, “will join the middle class.”

Discussing China and India, he said, “They want the prosperity that has eluded them in the last century,” and have a collective desire that could create “billions of potential consumers.”

Brown described a world at an economic crossroads. On one hand, nations could trigger protectionist measures, but that would only start “another race to the bottom” for the lowest ages, he said, a sprint that the West can only lose. (Average Chinese wages are $400 a month, and in Vietnam $100 a month.)

“Far better,” he said of Europe and America, would be to  “equip ourselves, prepare ourselves, for the consumer markets of the future” in China and elsewhere.

The United Nations is unlikely to play a direct role in developing his proposed global financial constitution, said Brown, who was skeptical of “190 countries in one room trying to make a decision.”

Instead, the G20, the informal name for the Group of 20 Finance Ministers and Central Bank Governors, is “the premier forum for economic coordination,” he said, and “the best organ for getting the world’s economy moving again.” The G20 already had “prevented a global depression,” said Brown, “and having begun to rescue the banking system, we don’t stop there. We go further.”

Going further would require broad coordination, he said, all the more important in the wake of the large-scale market failures of recent years. In the decade before the massive economic downturn, said Brown, markets and governments had “quite rightly” reconciled and agreed to partnerships bound by a common purpose: prosperity and growth.

But in the end, “None of the (economic) theories we had in 2007 stood up to examination,” he said. “Markets did not self-adjust. Markets self-destructed.” They did not recover. They froze.

Market failure “comes down to this simple issue,” said Brown, “that markets need morals.” He called for a global economic system that encouraged the traditions of “enterprise and competition and risk,” but that also contains a sense of “fairness and responsibility.”

In any new world economic order, the United States has an important role to play, said the visiting Brown. “You are the most successful economic power of the century. You have the most innovative technologies and entrepreneurs the world has ever seen.”

He also praised the United States for its vision of a Marshall Plan to revitalize Europe after World War II, and for its early advocacy of global entities such as the International Monetary Fund and the World Bank.

Why not dream big again? “During my lifetime, things that I thought impossible have actually happened,” said Brown, who listed the collapse of apartheid in South Africa, the end to the Cold War, and the return of self-determining nations throughout Europe.

“We can fashion a global cooperation that is far stronger and far deeper than anything we’ve had before,” he said.

Brown spent much of his week at Harvard meeting with students. He ate pizza with 50 freshmen and spoke to the Harvard College British Club, the Harvard International Relations Council, and the Woodbridge International Society.

Brown, a one-time university lecturer who has a Ph.D. in history from the University of Edinburgh in his native Scotland, clearly relished his time with Harvard audiences. He called his home for a week “one of the greatest international universities of the world.”

A university is a place known for rationality, objectivity, and the pursuit of knowledge and truth, said Brown, “all the qualities you have to leave behind when you go into politics.”

He used his perspective as both a historian and as a recent resident of 10 Downing St. to illustrate “the very new age” the world is in today.

One 19th century predecessor as prime minister, Benjamin Disraeli, spent much of his time writing poetry. Another cared more for horse racing than for cabinet meetings.

But in 1929, Britain and many other nations received a shock of modernity in the guise of the Great Depression. “Our political systems were totally unprepared for these great events,” said Brown. “We were amateurs in a world of huge problems, huge challenges that had to be met.”

He quoted another prime minister, Winston Churchill, who said of the 1930s, “We were resolved to be irresolute, we were adamant for drift … We were all-powerful for impotence.”

There is no time for drift today either, said Brown, in this “totally new world” beset with deep problems. “We need new policies and new institutions and new ways of doing things.”