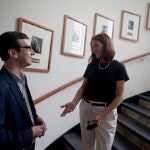 The backdrop on retirement funds

Five students dedicated to the study of computer science at the Harvard School of Engineering and Applied Sciences (SEAS) were named among the recipients of the 2011 Siebel Scholars awards.

The students are among other honorees hailing from Carnegie Mellon University, the Massachusetts Institute of Technology, Stanford University, Tsinghua University in China, University of California, Berkeley, and the University of Illinois, Urbana-Champaign.

Siebel Scholars are selected from among students who rank in the top of their class and are chosen by the dean of their respective schools on the basis of outstanding academic achievement and demonstrated qualities of leadership.

SEAS Dean Cherry A. Murray will host a reception for the winners later this fall. To read more on the students and their projects, visit the SEAS website.