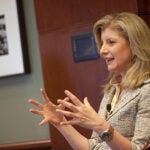 President Drew Faust and Eric Balderas ’13 paid a visit to Sen. Richard Durbin’s office on Capitol Hill Wednesday (Sept. 15) to express their gratitude for his support of the DREAM Act and his assistance in helping the Harvard student avoid deportation earlier this year.

“Eric and I want to thank Senator Durbin for his sponsorship of the DREAM Act, which would throw a lifeline to thousands of students from across the country like Eric, who, through no fault of their own, face uncertain futures due to their immigration status,” Faust said. “These young men and women are working hard in school and are dedicated to a future living in and contributing to our communities or serving in the military. I believe it is in our best interest to educate all students to their full potential.”

A biology concentrator, Balderas came to the United States from Mexico at age 4, with his parents. He was arrested on June 7 as he tried to board an airplane back to Boston after visiting his mother in Texas.

With Balderas facing deportation, Harvard officials brought his case to the attention of Durbin and members of the Massachusetts congressional delegation. The deportation was stayed after the Illinois senator contacted Immigration and Customs Enforcement.

Durbin has been one of the top proponents of the Development, Relief and Education for Alien Minors Act, federal legislation that would provide certain undocumented immigrant students the opportunity to earn conditional permanent residency, provided they arrive as children, are long-term U.S. residents, have good moral character, and complete two years of college or military service in good standing.

“Eric’s goal in life is to become a cancer researcher, but he can’t reach that goal because he does not have legal status,” Durbin said. “America would be better off if we give talented young immigrants, like Eric, a chance to contribute more fully to the only country they’ve ever known.”

The bipartisan bill could be brought to the floor as early as next week, Durbin said.