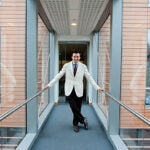 Tracing the roots of political thought

Students recount their summer internships and work in many fields, nations

For some Harvard students, summer vacation meant sandy beaches, curbside urban cafes, or jobs just around the corner from home.

But not for Annemarie Ryu ’13.

The 19-year-old spent eight weeks as a medical field researcher in Nicaragua, living in a $10-a-night hostel, interviewing health care workers in Spanish, and — late at night — poring over records on HIV and congenital syphilis. She called her summer a “transformative experience” that left her feeling shaken, honored, lucky, and ready years in advance for her senior thesis.

Ryu was among the thousands of Harvard students whose summers involved meaningful adventure, study, work, and service abroad.

Some of the places were far away in reality, like the Ukraine, Uganda, Brazil, and Bangladesh. A handful of Harvard students, for instance, spent the summer on remote Idjwi, an impoverished island in Lake Kivu in central Africa. An Amani Global Works project is trying to improve health care on the large island, where only three doctors now live.

“Participating in a significant international experience is becoming the goal for increasing numbers of Harvard undergraduates,” said Catherine Winnie, who directs Harvard’s Office of International Programs.

Statistics gathered by her office bear that out. From 2001 through 2009, summer travel by Harvard undergraduates — for study alone — shot up more than 700 percent.

Other student travel over the summer crossed cultural divides into tough urban neighborhoods in New York, Chicago, and New Orleans.

The Center for Public Interest Careers at Harvard College sent 25 undergraduates to New York City for 10 weeks of full-time work in its CPIC-Heckscher Fund for Service Internship Program. Among other things, students worked on a mural project, combined tutoring with squash instruction, and ran a six-week college-readiness boot camp on the Lower East Side.

Students elsewhere in the world fixed a deep-water well in the Dominican Republic, studied hypertension in Paris, and tutored children in Boston’s diverse Mission Hill neighborhood.

“It made me realize I want to be a teacher,” said Ann M. Cheng ’12, who spent her second summer working at the Mission Hill Afterschool Program, one of 12 day camps run by the Phillips Brooks House Association (PBHA).

Twenty-four staffers, including seven Harvard undergraduates, held morning academic sessions for 80 campers ages 6 to 13, and in the afternoon took field trips, including a ferry to Georges Island.

The experience made her feel grounded, said Cheng, who mentors a Dominican teen during the school year, and makes weekly trips to Mission Hill.

Dierickx was one of 50 students in the Weissman International Internship Program this summer. Weissman interns fanned out around the world, educating former child soldiers in Uganda, studying risk management in South Africa, and breeding reef fish in New Zealand.

Opportunities for serious study, work, and service abroad abound at Harvard, with programs big and small at virtually every School.

At the Harvard Kennedy School (HKS), summer work and internships are considered critical to the student experience. Its Belfer Center for Science and International Affairs sponsored student work trips to New Orleans, part of the ongoing Broadmoor Project. And the HKS-affiliated Rappaport Institute for Greater Boston sponsored 13 fellows from six Harvard Schools, including students in medicine, government, and business.

The Center for Public Leadership at HKS sponsored summer interns, including one who worked publicizing the newly released film “Countdown to Zero,” which features Harvard experts speaking on the danger of nuclear weapons.

Lindsay Berger, M.P.P ’11, worked with the educational adviser in the San Francisco mayor’s office. Her issue was post-secondary education and what she called “the missing middle,” that large cohort of high school graduates not ready for college.

Jaymin Kim ’12, a social studies concentrator from suburban Toronto, was a Director’s intern in New York City. She worked with Amnesty International, where in eight weeks she learned how to organize a rally, shoot a video, and stage a panel. Living near Penn Station, said the Korea-born Kim, “was an international experience for me.”

IOP also has a summer stipend program with 225 students this year, and a summer-in-Washington program that sent 300 undergraduates to Capitol Hill.

Caterina Yuan ’11 spent the summer in Brazil on an internship sponsored by the Harvard Institute for Global Health. (The summer before, she studied traditional local medicine in China.)

Crystalee Forbes ’11 was in Venice doing coursework at the Harvard Summer School, which this year sponsored more than 25 study-abroad programs. Students visited nearly every continent for school — from Beijing and Bangalore to Oxford and Prague.

Christopher Jackson ’12 lived in a South African Zulu township during a new IOP summer study abroad program on globalization, sports, and development. It wasn’t all work for the Ontario, Canada, resident who is a government concentrator: There is an AP photo of a wide-eyed Jackson in the crowd at a World Cup soccer game.

Graduate students had their own range of summer opportunities.

At HKS, the Hauser Center for Nonprofit Organizations sponsored seven summer internships. Dalia Al Kadi, an M.P.S./I.D. student, studied the access barriers to diarrhea drugs in India. Irene Hu, an M.P.P. student, worked in Malawi and Ethiopia with the group Save the Children.

Joseph Livesey, a master’s degree student at Harvard’s Davis Center for Russian and Eurasian Studies, spent 10 weeks in Kiev, Ukraine, a place he had been visiting for five years, but never as a scholar. By day, he studied archival records on famine during the 1930s, an experience that gave him a thesis topic. (“It was great to be a Harvard student,” said Livesey. “That means something to everyone.”) At night, ranging out from his $500-a-month apartment, he blended into Ukrainian life with old friends — at the park, at dinner, or sitting at makeshift beer cafes.

“This is tremendous experience to have had,” said Livesey, 28, who speaks and reads Mandarin, Russian, and Ukrainian, and is working on his Uzbek.

The Davis Center gave out 39 study grants this year, most for summer travel, said research programs coordinator Joan Gabel. Graduate students won 25, and undergraduates the rest.  Students traveled to nearly every former Soviet republic, she said, as well as to archives in Vienna and Dublin.

“For undergraduates, summer experiences can be major forces,” said Gabel, moments that redirect both academic and personal interests. “And they open doors for people” through language training.

For graduate students, she said, interviews and archival work abroad make for “more robust dissertation research” and can even change the direction of research. (Livesey, for one, went to the Ukraine this summer to study the Chinese merchants he remembered in Kiev, but they had largely disappeared.)

For undergraduates, the intensity and duration of summer work and study has a special impact, said Gene Corbin, who is Harvard’s guru of public service work. (He is the Class of 1955 Executive Director of the PBHA, whose dozens of programs draw in a quarter of Harvard undergraduates.)

Research done at PBHA last year shows a strong correlation between public service work in the summer and a student’s decision to pursue a public-interest career, he said. “They frequently realize: This is the kind of work I want to devote my life to.”

Linda Zhang ’12 spent 10 weeks in Geneva working for the United Nations, first for the the Office of the U.N. High Commissioner for Refugees, and then on the U.N.’s new Expert Mechanism on the Rights of Indigenous Peoples. A native Hawaiian, Zhang even joined the Global Indigenous Youth Caucus in July.

“It was an amazing experience,” she said of Geneva. “This summer inspired me to continue working in this field.”

She missed nothing and gained everything, said Zhang, who had a week at home in Honolulu before school began. “I can have my beach vacation now.”

The world is their classroom