Documenting a colonial past 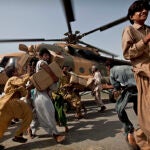 In Pakistan, controlling water is key

A Harvard history professor and a team of current and past students are helping Kenyans to tell the story of their break from colonial Britain in a new exhibit in the East African nation’s National Museum.

The exhibit, which is being designed so it can travel around the country in advance of the 2012 elections, is expected to be completed next summer, according to Caroline Elkins, professor of history and African and African American Studies, and chair of the University Committee on African Studies, who embarked on the project in collaboration with the Kenya Oral History Center.

Elkins, whose own research focuses on the end of the colonial era, said the project is being conducted in collaboration with scholars from Kenyan universities.

This summer, Elkins, doctoral student Erin Mosely, and recent graduates Megan Shutzer and Julia Guren spent several weeks in Kenya, conducting research and gathering artifacts — photos, identification cards, labor passes — that will provide the framework for the audio and videotaped interviews that will flesh out the exhibit.

“A lot of the goal of this is for Kenyans to have access to different ways of understanding their own history,” Elkins said. “History is subjective. … It will allow them to make their own decisions on it.”

The group, working with Kenyan scholars, traveled around the country to the national archives, mission archives, private collections, and the collections of the National Museum itself. Elkins said the work has helped build a storyline for the exhibit, which she said goes beyond a plain vanilla “nationalism and resistance” treatment, delving into the complexity of the times and of Kenya’s society, in which individual loyalties are sometimes divided between nationalism and the still powerful pull of tribal groups.

Though much of the collecting of personal stories, through interviews with participants, remains ahead, Elkins said the researchers did have conversations this summer with some key individuals, including the nation’s first minister of foreign affairs, Njoroge Mungai, who is now 84. They also interviewed a World War II veteran, approaching 100 now, who served in the King’s African Rifles while Kenya was still under British colonial rule.

Though the main beneficiaries are intended to be the visitors to the exhibit, including many schoolchildren, those working on it are learning as well.

With the witnesses to the colonial era aging, Mosely said, the project is happy to have these firsthand accounts of history.

“These stories are about to be lost,” Mosely said.

Shutzer, who graduated from Harvard College in May, wrote her senior thesis on Kenya’s 2007 postelection violence. She said the project is a dream come true, bringing together her interests and skill. Shutzer will stay on in Kenya during the coming academic year to keep the project moving. She expects more Harvard students will help over winter break and possibly next summer.

“I had plans to work in the D.C. schools next year. But this project was so incredible, I couldn’t leave it,” Shutzer said.

On Sept. 14 from 6:30 to 8:30 p.m., the Belfer Center will sponsor a talk titled “Kenya’s New Constitution: The Birth of the Second Republic” at the Askwith Lecture Hall, Longfellow Hall, 13 Appian Way, Cambridge, Mass. Open to the public, the featured speaker will be Elkanah Odembo, ambassador from the Republic of Kenya to the United States.