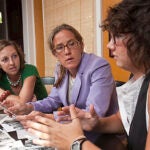 Documenting a colonial past

Does two weeks in the Caribbean sound inviting?

Maybe not, if you have to bring work boots, floppy sun hats, mosquito repellent, and malaria pills.

A group from Harvard — mostly undergraduates, with Mulroy as a co-leader — toiled from Aug. 8 to 22 in the remote, impoverished Las Mercedes region of the Dominican Republic. It was a vacation, but with attitude.

After deplaning in Santo Domingo, the party of 12 drove southwest in a crowded van. The six-hour drive toward the Haitian border delivered tantalizing views of the blue Caribbean, along with lush forests and verdant mountains. But conventional pleasures were not on the agenda.

Instead of tourism, the group chose the joy of work, volunteering with Children of the Border, a nonprofit founded by Harvard graduate student Sebastian Velez. He prefers the term “voluntourism” for this kind of travel — a combination of new places and righteous work.

Children of the Border’s clientele are the impoverished Haitian sharecroppers living along the Haitian-Dominican border. Alcoa Inc. built villages for the workers. By 1982, bauxite mining had ceased. Now Los Mercedes is riven by chronic disease, illiteracy, high infant mortality, and poor access to clean water.

Some of the Harvard volunteers helped local laborers to refurbish a village well. They bought PVC piping and other materials with a $10,000 Projects for Peace grant written by Min Lee ’13.

Other volunteers did house-to-house surveys on water use, contraception, and nutrition, part of a longer-term project to assess villagers.

“Some people go to London or Paris or drink coladas on the beach,” said Velez, a seventh-year doctoral student in organismic and evolutionary biology. “But this type of student wants to do something real.”

The workdays, counting evening meetings on lessons and logistics, stretched to 14 hours or more. One night, for a few volunteers, work continued until 3 a.m., when a new manual pump finally sprayed water from 250 feet down. Ecstatic villagers, to celebrate the end of six weeks of labor, roasted a pig.

The students and other Harvard participants paid their own way, about $900 each for flights, food, and lodging. They ate local cuisine (“delicious,” said participant Maureen George), slept three to a room, and got by — just fine, thank you — with tepid showers.

Her shirts were soaked through in the first hour every day, said George, director of development for the Humanist Chaplaincy at Harvard, “as wet as if you were standing in the rain.” At 67 and a nonstudent, she was the trip’s outlier.

“I was glad to get home to have a real washing machine, with hot water,” said George, “to get the red mud out.”

Mulroy had his own cravings after getting back to the United States. “I wanted fast food,” he said.

But in the end, these temporary workers ignored the trip’s discomforts. There were compensating rewards: working for a just cause (fresh water), getting a glimpse at another culture, and learning how to get along with others.

“It’s probably more influential to me than 99 percent of the things I have done at college,” said Mulroy of the trip, which he co-directed with Toby Norman ’10. “The biggest thing is working with people.”

That meant working with each other, as when, for the first two days, the van needed a group push to get jump-started. “Instead of taking it as a burden,” said Velez, “the students took it as an opportunity to bond.”

Then there are issues surrounding working with people in the field, said Mulroy, given that language difficulties, cultural differences, and long travel times can lead to snags.

To prepare, those going on the August trip attended a series of weekly “field preparation” workshops. Starting last fall, organizers also recruited students with expertise in international development, Spanish, Caribbean cultures, and Haitian Creole. “There was a lot of experience in this group,” said Mulroy.

It helped, he said, that many of the volunteers were affiliated with the Harvard Project for Sustainable Development (HPSD), a multi-School Harvard group of which Mulroy is co-president.

Some of those on the August visit were also veterans of a January work trip to Las Mercedes for DRwater, a purification and water-access project overseen by HPSD and Children of the Border. Months ago, said Mulroy, “We saw how well a volunteer group could do.”

Preparation for the August trip also had a technical side. How do you fix a well’s diesel-fired electrical pump? How do you install a manual well beside it — one that villagers can afford to use? That took weeks of research by the undergraduates, said Velez, including consultations with experts at the Massachusetts Institute of Technology.

The work paid off. For one thing, the students devised a water level sounder, which is used to detect water levels, for $20. The usual cost is $1,000.

Velez, Mulroy, and others have already started planning the next doing-good adventure, a trip in January to build a school in the same border region. A dozen Harvard volunteers will pay their own way, said Velez. “These are projects they feel good about,” he said.

During the August trip, George wrote her family regular reports, including recounting the sadness she felt at experiencing a corner of the world that has so little and struggles “against so many odds.”

“You can only do a little bit at a time,” said George. “But not to do that would be a crime.”